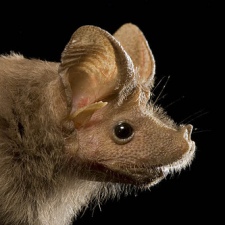 Many mammals, and some birds, escape the winter by hibernating for three to nine months. This period of dormancy permits species which would otherwise perish from the cold and scarce food to survive to see another spring.

The Middle East, with temperate winters, was until recently considered an unlikely host for hibernating mammals.

A new paper shows it is happening and that is not the only odd thing - the researchers show that two species of the mouse-tailed bat (Rhinopoma microphyllum and R. Cystops) are hibernating at the unusually warm and constant temperature of 68°F in caves in Israel's Great Rift Valley. From October to February, these bats were discovered semi-conscious, breathing only once every 15-30 minutes, with extremely low energy expenditures.

The researchers monitored the activity of the bats during this period and found that they neither fed nor drank, even on warm nights when other bat species were active in the same caves. The researchers used heat-sensitive transmitters to measure the bats' skin temperature in the caves. Then in the laboratory, they measured the bats' metabolic rates and evaporative water loss at different ambient temperatures.

The bats' average skin temperature in the caves was found to be about 71.6°F. Both bat species reached their lowest metabolic rates at cave temperatures (about 68°F). During hibernation, the bats also exhibited long periods of suspended exhalation.

"Hibernation in mammals is known to occur at much lower temperatures, allowing the animal to undergo many physiological changes, including decreased heart rate and body temperature," said Prof. Noga Kronfeld-Schor, Tel Aviv University Chair of the Department of Zoology. "But we have found these bats maintain a high body temperature while lowering energy expenditure levels drastically. We hypothesize that these caves, which feature a constant high temperature during winter, enable these subtropical species to survive on the northernmost edge of their world distribution.

"Until recently, it was believed that there was no mammalian hibernation in Israel, apart from hedgehogs. But this discovery leads us to believe there may be others we don't know about. Scientists haven't been looking for incidences of hibernation at warm temperatures. This is a new direction for us.

The researchers found that the bats, like camels, flare their nostrils to conserve water. A month before hibernating, they also changed their diets from unsaturated to saturated fats, feeding only on queen ants with wings to gain a 50 percent increase in body mass.

Published in Proceedings of the Royal Society of London.
News Articles
More Articles All Articles
About