News Staff
The Antarctic Ocean hosts rich and diverse fauna despite inhospitable temperatures close to freezing. While it can be hard to deliver oxygen to tissues in the cold due to lower oxygen diffusion and increased blood viscosity, ice-cold waters already contain large amounts of dissolved oxygen.

That is why an Antarctic octopus that lives in ice-cold water has evolved specialized blood pigments (e.g. hemoglobin), and why that  blue-blooded benefit could help to make it more resilient to climate change than Antarctic fish and other species of octopus. Octopods have three hearts and contractile veins that pump 'hemolymph', which is highly enriched with the blue oxygen transport protein hemocyanin (analogous to hemoglobin in vertebrates).

To find out what makes the hemocyanin of an Antarctic octopus so well-adapted to cold water, the researchers collected and analyzed the hemolymph from the abundant Antarctic octopod species Pareledone charcoti, and two octopod species collected from warmer climates - the South-east Australian Octopus pallidus and the Mediterranean Eledone moschata. 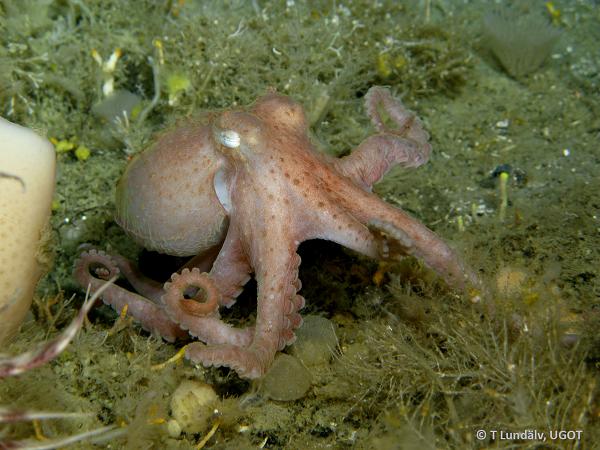 The Antarctic octopus Pareledone charcoti had the highest concentration of haemocyanin in its blood - at least 40% more compared to the other species, and ranked amongst the highest levels reported for any octopod. The researchers say that these high blood pigment concentrations may be compensating for the haemocyanin's poor ability to release oxygen to tissues while in cold environments, and could help to ensure sufficient oxygen supply.

The Antarctic octopod haemocyanin was also found to shuttle oxygen between gills and tissue far better at 10°C than at 0°C. At 10°C the Antarctic octopod's haemocyanin had the potential to release far more oxygen (on average 76.7%) than the warm-water octopods Octopus pallidus (33.0%) and Eledone moschata (29.8%). This ability may help the Antarctic octopod tolerate warmer temperatures in addition to the cold, and may link to the life style of Pareledone charcoti, which is also reported to reside in warmer shallow waters and rock pools.

Considering the strong warming trend at the Antarctic Peninsula, Pareledone charcoti may eventually benefit from its capacity to adjust blood oxygen supply to more variable temperatures than other species, including Antarctic fish.

The new findings show how the blood pigment haemocyanin in octopods is able to support oxygen supply in both cold and warm environments, and could help explain why octopods remain so populous across a wide spectrum of ecological niches.

Lead author Michael Oellermann from Alfred-Wegener-Institute, Germany, said, "This is the first study providing clear evidence that the octopods' blue blood pigment, haemocyanin, undergoes functional changes to improve the supply of oxygen to tissue at sub-zero temperatures. This is important because it highlights a very different response compared to Antarctic fish to the cold conditions in the Southern Ocean. The results also imply that due to improved oxygen supply by haemocyanin at higher temperatures, this octopod may be physiologically better equipped than Antarctic fishes to cope with global warming."