In the bird world, the color red has special significance. Many species use red signals to attract mates or deter rivals, adding the color to their beaks, feathers, or bare skin. Generally speaking, as far as many birds are concerned, redder is better. Now, two teams of researchers have independently identified an enzyme-encoding gene that allows some bird species to convert yellow pigments from their diets into that remarkable red. Their findings are reported on May 19 in Current Biology.

"To produce red feathers, birds convert yellow dietary pigments known as carotenoids into red pigments and then deposit them in the feathers," says Miguel Carneiro of Universidade do Porto in Portugal. "Birds also accumulate these same red pigments in one of the cone photoreceptor types in their retina to enhance color vision. We discovered a gene that codes for an enzyme that enables this yellow-to-red conversion in birds."

"It was known that some birds have the ability to synthesize red ketocarotenoids from the yellow carotenoids that they obtain in their diet, but the gene or enzyme involved, and its anatomical location, have been obscure," adds Nick Mundy of the University of Cambridge. "Our findings fill this gap and open up many future avenues for research on the evolution and ecology of red coloration in birds." 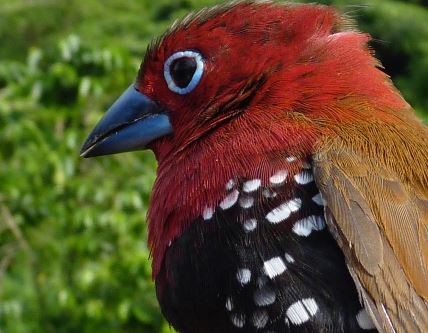 This is a photo of a Peter's Twinspot in Tanzania. Credit: Staffan Andersson

Carneiro's team, including Joseph Corbo of Washington University School of Medicine in St. Louis and Geoffrey Hill of Auburn University, made their discovery thanks to canary fanciers who crossed a yellow canary with a red siskin almost 100 years ago, producing the world's first red canary. In the new study, the researchers compared the genome sequences of yellow and red canaries to red siskins in search of the gene responsible for the birds' color differences.

Their search led them to a cytochrome P450 enzyme, dubbed CYP2J19. Further analysis of the gene's expression showed that the enzyme is expressed at high levels in the skin and liver of red factor canaries, strongly implicating it as the enzyme responsible for red coloration.

In the other report, Mundy and colleagues, including Staffan Andersson of the University of Gothenburg, and Jessica Stapley of the University of Sheffield, found their way to the cytochrome P450 gene cluster through comparisons of standard zebra finches, which have a distinctive red beak, and mutant zebra finches with yellow beaks. Zebra finches have three related cytochrome P450 genes, and the researchers found multiple mutations in this genetic region in the yellowbeak birds. They further found that the enzyme was expressed in almost undetectable levels in the birds' yellow beaks.

The genetic findings pave the way for new kinds of studies on the red coloration of birds, according to the researchers. They also raise many new and intriguing questions. For example, the gene now identified belongs to a family of genes known to play an important role in detoxification.

"In sexual selection, red color is thought to signal individual quality and one way it can do this is if the type or amount of pigmentation is related to other physiological processes, like detoxification," Andersson says. "Our results, which link a detoxification gene to carotenoid metabolism, may shed new light on the debated honesty of carotenoid-based signals."

Corbo says one thing that came as a particular surprise to them was the discovery that the "redness gene" is present in the genomes of many, if not most, bird species, not just those with red feathers.

"Diurnal birds appear to use this gene to produce red pigments in the retina to enhance color vision," Corbo says. "However, only birds with red feathers additionally express the gene in their skin. These findings suggest that nearly all birds have the latent capacity to make red feathers, but in order to actually do so, they must evolve the means of expressing [this gene] in the skin in addition to the retina."

Mundy and Andersson are now returning to the birds where their search for the "red-maker" once began, the African widowbirds and bishops, which show "spectacular differences among different species." Most intriguingly, Andersson adds, "dazzling red colors have evolved repeatedly in this group, mostly by the mechanism described here, but there are some very interesting exceptions."

Corbo and colleagues also plan to explore red feathers in many more bird species, to see whether they rely on the same or different mechanisms. They say they also will continue using the canary as a model for uncovering the genetic basis of other interesting traits in birds.