Take a spot that only gets 6 to 8 inches of rain per year, with erosion causing such blinding dust that there is zero visibility, and build a wheat farm.

Wait, why would you do that? Washington State University researchers do it in the Horse Heaven Hills of south-central Washington to understand summer fallow management practices that can mean efficient water and soil conservation and help farmers everywhere.

Farmers in the Horse Heaven Hills practice a winter wheat-summer fallow rotation where only one crop is grown every other year on a given piece of land. Average yields can be as low as 18 bushels per acre - compared to upwards of 120 bushels per acre in the higher rainfall area of the Palouse in eastern Washington. The margins are tight but with careful management wheat and continued government subsidies farming in the Horse Heaven Hills can be profitable. 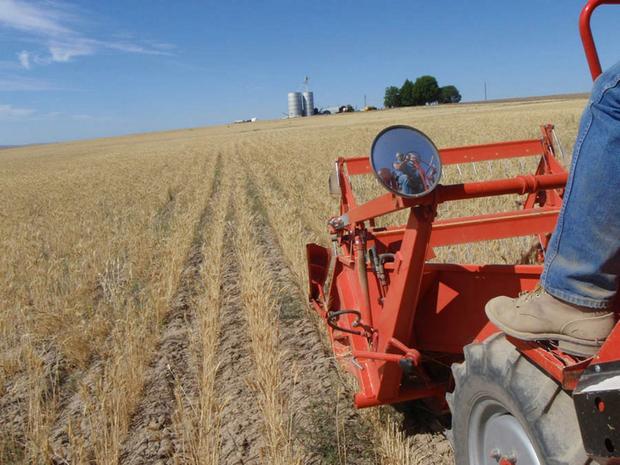 Wheat yields in Eastern Washington's dry Horse Heaven Hills can be a fraction of those further east but can still be profitable with the right management. Credit: Washington State University photo

To get the highest yield, farmers need to plant winter wheat in late August or early September after a year of fallow. The fallow period allows enough moisture from winter and spring rains to accumulate in the soil for seeds to get established.

"In east-central Washington, if you can't plant in late summer into deep seed-zone moisture in fallow, then you have to wait for fall rains in mid-October or later," Schillinger said.

The longer it takes to get winter wheat seedlings established, the lower the potential for good yields. To help ensure soil moisture remains in the seeding zone, farmers till the soil in the spring. Tillage breaks up the capillary action of the soil; this helps slow soil moisture evaporation in the seed zone during the hot, dry summer months.

But too much tillage can cause soil loss through wind erosion that feeds hazardous dust storms.

Undercutting in the east

Compared to traditional tillage, Schillinger and Young found that undercutter tillage was the best option for fallow in the slightly moister eastern region of the Horse Heaven Hills, where late-August planting is possible and spring tillage helps retain summer soil moisture.

With wide, narrow-pitched, V-shaped blades, the undercutter slices beneath the soil surface to interrupt capillary action in the seed zone without causing much disturbance of the soil surface.

Schillinger said scientists and farmers have conclusively shown that spring tillage with the undercutter effectively retains seed-zone moisture. It also retains significantly greater surface residue and surface soil clods - which are less likely to be disturbed by wind and become airborne - compared to traditional tillage implements such as a tandem disk or field cultivator.

No till in the west

In the western region of the Horse Heaven Hills, the best option for controlling wind erosion was to practice no-till fallow; that is, to avoid tillage altogether. Most of the time, rainfall in this area simply isn't sufficient to establish an early stand of winter wheat with any fallow management system.

"There's no reason to till the soil when you already know in the spring that it will be too dry to plant wheat in late August," Schillinger said.

Economist Young found that, despite the modest grain yield potential, wheat farming in this environment can be profitable - with enough acreage and judicious use of inputs to manage costs. In fact, late-planted winter wheat on no-till fallow was just as profitable as traditional-tillage and undercutter-tillage fallow treatments at the western site.