News Staff
Tillage. mixing and churning soil and crop residues like corn stalks, has been around for thousands of years. Even the earliest farmers knew that soil could become depleted and tillage could make the next crop more likely to be successful so we eventually developed a chisel plow for field cultivation, to turn over soil at the end of the growing season.

But not everyone could afford a plow and some just let old stalks break down naturally, a kind of top level composting. Then in the spring they planted new seeds. Some didn't till at all.

As agriculture became arguably the world's most advanced ancient technology, food went from being a basic necessity and a large chunk of annual income to being a cheap commodity. As that happened, people were able to attribute more personal values to it, they could think about more than cost, like the process involved. Though water use, environmental strain, and land use per person fed has plummeted, there became new concerns about how farmers did all that; so some farmers reverted to older ways; tillage is still tillage but minimal tillage became labeled "conservation tillage" and doing nothing at all, which used to be the plight of the poorest subsistence farmer, became "no-till."

Farmers selling the organic food process enjoy higher profit margins, customers are willing to pay to have only certain types of older pesticides and fertilizers, and no-till and conservation tillage are also ways to appeal to that market.

But can they be realized by the conventional market? In some cases, yes. The rest of agricultural science and technology has advanced so much many farmers can use conservation tillage without drops in yields. It's a bad idea to use all of the ancient ways - unless you want 40 percent crop losses - but one or two mixed in with science will work.  Farmers have other factors to consider beyond tillage,

Yet there is a belief that yields will drop diseases will become more prevalent so to create some data, a team did a multi-year study to compare conventional plowing with three types of conservation tilling: Shallow vertical till; Strip till using shanks; and Strip till using coulters. 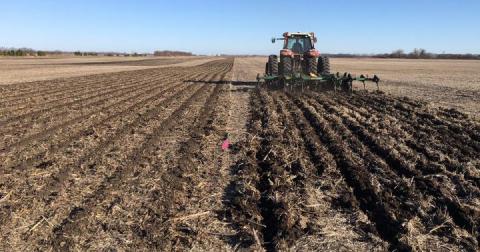 On the left, strip till and on the right, conventional plow strips. Credit: Aaron Daig, North Dakota State University

After four years, the experiment found little difference among the four tillage systems at any of the farms so conservation tillage practices might lower on-farm costs while preserving long-term productivity.

As always, there is a reason for the term "just academic" even when it comes to agriculture. Interested farmers who might want to try it will start with one field and evaluate many factors before making expensive changes.
News Articles
More Articles All Articles
About