Tropical Storm Simon, once a hurricane, is expected to bring heavy rain to portions of the central Plains and Midwest on today and tomorrow. Since it is not hitting New York City during presidential election season, it won't be called a SuperStorm and get much national media attention.

Images from NOAA's GOES-East satellite from Oct. 6 through Oct. 9 were made into a 39 second animation by the NASA/NOAA GOES Project at NASA's Goddard Space Flight Center in Greenbelt, Maryland. The animation shows Simon as a Tropical Storm in the Eastern Pacific Ocean on Oct. 6 when it was located off the coast of Baja California, Mexico. The animation shows Simon's landfall and movement into mainland Mexico. Over the course Oct. 6 through 9, Simon's circulation center dissipated and the clouds and showers spread into northern Mexico and the U.S. Southwest.

This morning, Simon's remnants were over the U.S. desert Southwest. That remnant moisture is expected to meander toward the Colorado Front Range by Thursday evening. 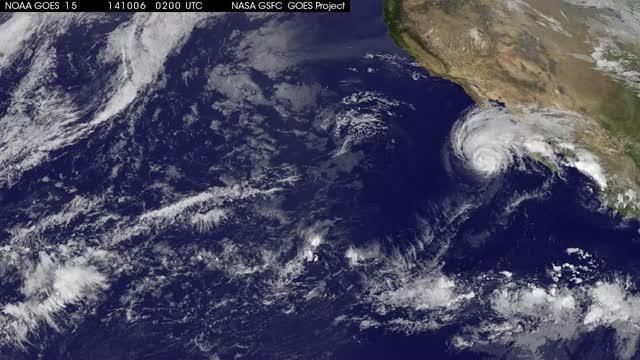 On Oct. 9, NOAA's National Weather Service (NWS) noted moisture from the remnants of Tropical Storm Simon is expected to bring heavy rain to portions of the central Plains and Midwest on Thursday into Friday.

"Storm-total rainfall amounts of 2 to 3 inches are possible across parts of eastern Kansas and western and central Missouri, bringing a threat of flash flooding," NWS stated in a short range forecast discussion.