News Staff
A decade ago there was mass hysteria among the fringes of science academia because American President George W. Bush limited federal funding for human embryonic stem cells to existing lines. Accompanying claims were that Alzheimer's Disease wouldn't be cured and Republicans hated science.

In 2014, it is difficult to remember what all the fuss was about. California wants its $3 billion in hESC funding back, though that money did finally produce one paper, and adult stem cells have done all of the things hESC research was speculated to be able to do. Now, a final hurdle is about to be crossed: researchers have successfully 'reset' human pluripotent stem cells (iPSCs) to a fully pristine state, the point of their greatest developmental potential.

The ability to create hESCs using technology happened in the late 1990s and President Clinton delayed any decision to his successor - he had signed the Dickey-Wicker amendment, which made federal funding for hESCs illegal so the breakthrough was achieved using no federal funds. Bush instead used an executive order to create a compromise in order that research could go on without violating the law, because hESCs, which originate in early development, are capable of differentiating into any type of cell and that is vital to curing numerous diseases. Except for California, no states were buying into the aggressive claims of hESC proponents, nor did the private sector or even most researchers. They instead pursued using uncontroversial adult stem cells, like liver, lung and heart, to do the job of hESCs. 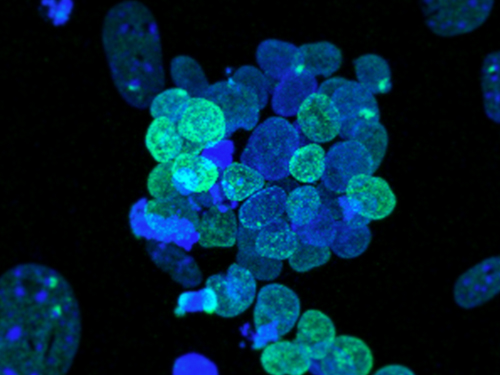 But scientists had only been able to revert adult human cells into pluripotent stem cells with slightly different properties that predispose them to becoming cells of certain types. Authentic ES cells had only been derived from mice and rats. Until now.

At this point, subtle changes in gene expression begin to influence the cells, which are then considered ‘primed’ towards a particular lineage. Although pluripotent human cells can be cultured from in vitro fertilized (IVF) embryos, there were no human cells comparable to those obtained from the mouse.

“For years, it was thought that we could be missing the developmental window when naïve human cells could be captured, or that the right growth conditions hadn't been found,” Paul explains. “But with the advent of iPS cell technologies, it should have been possible to drive specialized human cells back to an earlier state, regardless of their origin – if that state existed in primates.”

Taking a new approach, the scientists used reprogramming methods to express two different genes, NANOG and KLF2, which reset the cells. They then maintained the cells indefinitely by inhibiting specific biological pathways. The resulting cells are capable of differentiating into any adult cell type, and are genetically normal.

The experimental work was conducted hand-in-hand with computational analysis.

“We needed to understand where these cells lie in the spectrum of the human and mouse pluripotent cells that have already been produced,” explains Paul. “We worked with the EMBL Genomics Core Facility to produce comprehensive transcriptional data for all the conditions we explored. We could then compare reset human cells to genuine mouse ES cells, and indeed we found they shared many similarities.”

Together with Professor Wolf Reik at the Babraham Institute, the researchers also showed that DNA methylation (biochemical marks that influence gene expression) was erased over much of the genome, indicating that reset cells are not restricted in the cell types they can produce. In this more permissive state, the cells no longer retain the memory of their previous lineages and revert to a blank slate with unrestricted potential to become any adult cell.

The research was performed in collaboration with Professor Austin Smith, Director of the Wellcome Trust-Medical Research Council Stem Cell Institute. “Our findings suggest that it is possible to rewind the clock to achieve true ground-state pluripotency in human cells,” said Smith. “These cells may represent the real starting point for formation of tissues in the human embryo. We hope that in time they will allow us to unlock the fundamental biology of early development, which is impossible to study directly in people.”

The discovery paves the way for the production of superior patient material for translational medicine. Reset cells mark a significant advance for human stem cell applications, such as drug screening of patient-specific cells, and are expected to provide reliable sources of specialized cell types for regenerative tissue grafts.