Though it has been in the works since 1996 and long passed both its original 2011 completion date and even the most aggressive budget estimate, the James Webb Space Telescope has a milestone that may get people excited: after 116 days of extremely frigid temperatures like that in space, the heart of the James Webb Space Telescope, the Integrated Science Instrument Module (ISIM) and its sensitive instruments, emerged unscathed from the thermal vacuum chamber at NASA's Goddard Space Flight Center in Greenbelt, Maryland.

Engineer Mike Drury, the ISIM Lead Integration and Test Engineer, is one of the test directors making sure that Webb will thrive in the frigid conditions at its final destination in space one million miles away from Earth. "The telescope is going to L2 or Lagrange Point 2, which is a very extreme environment," said Drury. "The heart of Webb called ISIM is a very important part of the observatory and will provide all of Webb's images."

The images the Webb telescope will someday take will allow us to look farther 'into the past' than ever before, coming closer to revealing the first galaxies forming 13.5 billion years ago. The telescope will also pierce through interstellar dust clouds to capture stars and planets forming in our own galaxy.

Operating a telescope powerful enough to complete these tasks requires incredibly cold temperatures. How cold? -387 degrees Fahrenheit, which is 40 degrees Kelvin and 260 degrees Fahrenheit colder than any place on the Earth's surface has ever been. 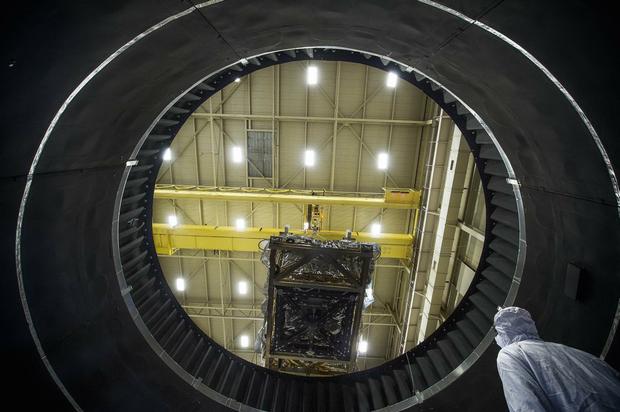 The view from inside NASA Goddard's Thermal Vacuum Chamber shows the JWST heart being lifted out by crane, after completing weeks of space environment testing. Credit: NASA/Chris Gunn

To create temperatures that cold on Earth, the team uses the massive thermal vacuum chamber at Goddard called the Space Environment Simulator, or SES, that duplicates the vacuum and extreme temperatures of space. This 40-foot-tall, 27-foot-diameter cylindrical chamber eliminates the tiniest trace of air with vacuum pumps and uses liquid nitrogen and even colder liquid helium to drop the temperature simulating the space environment.

"We complete these tests to make sure that when this telescope cools down, the four parts of the heart are still positioned meticulously so that when light enters the telescope we capture it the right way," said Paul Geithner, Webb's deputy project manger. "The biggest stress for this telescope will be when it cools down. When the telescope structure goes from room temperature to its super cold operating temperature, it will see more stress from shrinkage than it will from violent vibration during launch."

NASA photographer Desiree Stover captured the photo of ISIM as it was lowered into the chamber for testing. The heart of the telescope weighs about as much as an elephant. Inside its black composite frame the four science instruments are tightly packed and are specially designed to capture specific information about distant light in the universe.

Tightening the bolts and putting everything together beforehand required very dedicated teams. "When ISIM was lowered into the chamber at the start of the test, that was a pretty emotional moment that represented an intense amount of work," said Marc Sansebastian, a mechanical assembly, integration and test technician. "After ISIM traveled overhead, we shifted back to technical mode because there are a million things that happen that you don't see."

At any given time of day during the test, the control room held representatives from all four-instrument teams. Each instrument has a test engineer, who makes sure the test is going well, and a data analyzer. Those teams are testing the hundreds of electrical connections and computer programs that give life to Webb's heart. "Kind of like having a car in a garage in the winter. You want to check the car to make sure that it is still working," said Alistair Glasse, instrument scientist for the Mid-Infrared Instrument (MIRI).

"The weather this year was phenomenal for the test. When the weather is bad, when it's humid and when it gets stormy that's when we run into problems with the chamber," said Ray Lundquist, ISIM Lead Systems Engineer. "At the beginning of the test, we had a couple of storms and the building got hit by lightning that shut the whole system down for 30 minutes, but since that storm we have had really great weather."

"We've been very fortunate on this test. We've worked with all of the different teams. We have all been working shifts and pitching in," said Drury. "I'm really amazed at how well everyone is getting along together. We have a lot of people who are willing to help out."