Chris Rollins
If every beachgoer could have one, we'd never need sunscreen again. The new sunshield for NASA's James Webb Space Telescope, designed by Northrop Grummann  in Redondo Beach, California, is capable of rejecting nearly all of the approximately 250,000 watts of energy the spacecraft will be receiving from the Sun while in orbit - the equivalent to applying sunscreen with an SPF of 1.2 million.

Temperatures in space can fluctuate dramatically between shade and sunlight, reaching 400 K (260 F) in the Sun and 30 K (-406 F) in the shade. And while cold temperatures don't pose a huge problem to the JWST, combating the high temperature space in the sunlight is crucial for the operation of the telescope. The JWST will view the universe in the infrared wavelength, collecting the heat radiation from distant galaxies and stars. In order to do this, the detectors that receive the light need to be cooled to a cryogenic temperature of 40 K (-387 F). Any extra heat that makes it through to the detector will distort the image and make it unusable, similar to viewing a movie in a theater with the lights on.

The new telescope will orbit at a point known as L2 - a semi-stable point 1.5 million km from Earth that lies on the straight line drawn from the Sun to the Earth. This is a unique orbit that allows the detector side of the telescope to be continuously pointed out to deep space, away from both the Sun and the Earth. While this arrangement gives astronomers ample time to take pictures of distant objects, it poses a significant challenge to engineers who must determine how to keep the constant sunlight on the other side of the spacecraft from reaching the detector.

The Northrop Grummann team solved the heat problem using five layers of a polymer-based polymide film called DuPont Kapton E. Each layer is about as thick as a human hair and is tensioned by six perimeter booms and six cables. To reflect the Sun's heat, the Sun-facing sides of the two outermost layers are coated with an alloyed silicon and each remaining side is coated with vapor-deposited aluminum. The two silicon-coated sides reflect the Sun's rays directly back, while the rest of the heat that makes it through is reflected between the slightly angled layers until it escapes through the sides of the shield. When all is said and done, only about 1 watt of the incident 250,000 makes it through to the detector side of the spacecraft. 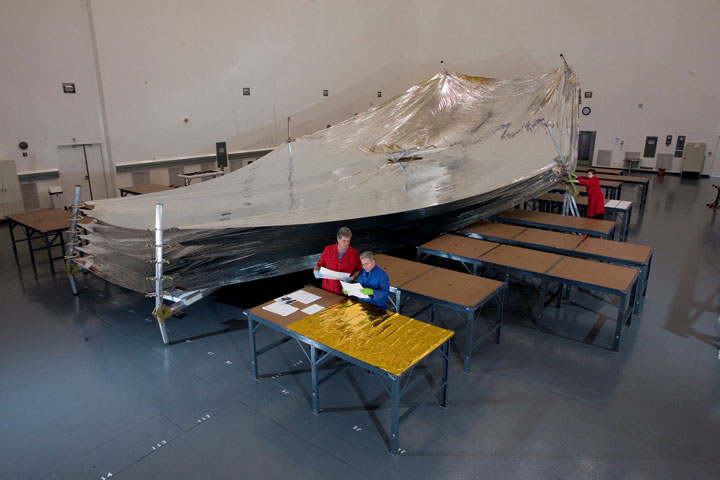 An Engineering Model of the Deployed Sunshield. Photo Credit: NASA.

In order to do its job properly, the sunshield must also withstand the impacts of small, sand-sized micrometorites and have the ability to resist tearing during launch and deployment. The Northrop Grumman engineers subjected Kapton E to six years of rigorous testing in order to verify that the material would hold up under all the conditions it is expected to experience.

Engineers used Auburn University's Hypervelocity Impact Facility to simulate bombardment by micrometeorites in the space environment. The sunshield was subjected to small particles of sand traveling at 12 kilometers per second while tensioned and undergoing the extreme hot and cold temperatures of space. The material was also exposed to space-like radiation in order to prove that the coatings would hold up under constant assault from the Sun.

Perhaps the most significant engineering challenge presented by the sunshield design was how to fold it so that it would fit in the launch vehicle and then deploy it in orbit properly without tearing. Mark Clampin, NASA's Webb Telescope Observatory Project Scientist at Goddard Space Flight Center, compared it to a candy wrapper: "To imagine how the Webb telescope Sunshield will appear, imagine 5 Sunshield layers the size of a tennis court and the thickness of a candy wrapper. The Webb telescope's Sunshields present new challenges, for instance how do you fold a candy wrapper the size of a tennis court?"

Arianespace's Ariane 5 ECI, the selected launch vehicle that will blast the JWST into orbit, only has a payload fairing 4.57 meters in diameter, so the shield will fold around the rest of the telescope until it has separated from the rest of the rocket. Once the telescope has reached a certain point on its way to L2, engineers will issue the command to unfold various parts of the telescope, including the primary mirror as well as the sunshield. The Northrop Grumman engineers recently demonstrated the ability to successfully fold and deploy a testing model of the sunshield.

The JWST is set to launch in 2013 and will take three months to reach its intended orbit and become fully operational. It will be able to see light from some of the first stars and galaxies to form after the Big Bang, greatly increasing our understanding of the universe.
Welcome to my Moon Base
More Articles All Articles
About