A team of researchers has developed a new model to study the motion patterns of bacteria in real time and to determine how these motions relate to communication within a bacterial colony.

The researchers chemically attached colonies of Escherichia coli bacteria to a microcantilever – a microscopic beam anchored at one end, similar to a diving board – thus coupling its motion to that of the bacteria. As the cantilever itself isn't doesn't generate any vibrations, or 'noise,' this allowed the researchers to monitor the colony's reactions to various stimuli in real time.

The traditional method of assessing a bacteria's antibiotic susceptibility– culturing bacteria on agar plates infused with antibiotics – is quite time-consuming in comparison, and can take up to a day to produce results. 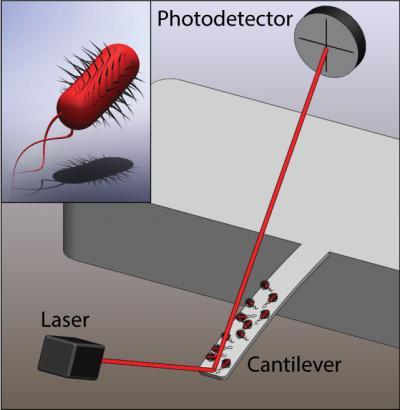 A microcantilever sensor with E. coli bacteria attached and a close-up illustration of a single bacterium (inset). The motion of the bacteria couple to the cantilever and the cantilever motion is detected using the optical beam deflection technique. Credit: L. Li and C. Lissandrello/Boston University

"When they die, they stop moving, so it's a good way to measure the effectiveness of an antibiotic," said Kamil Ekinci, an associate professor at Boston University. He and fellow researchers describe their work in the journal Applied Physics Letters, which is produced by AIP Publishing. "You know more or less immediately that they're dead."

"Here in this system – down to a couple hundred of bacteria – we're able to see their responses to external stimuli such as drugs," said Utkan Demirci, an associate professor at Stanford University School of Medicine. "This also potentially applies to other types of cells, such as drug resistance in cancer."

While cantilevers have been used before to characterize cellular mechanics, Ekinci and Demirci bring a new approach to look at cellular movement and noise in natural systems, hoping to eventually develop a disposable microfluidic chip.

"It's a new direction for tool development," Demirci said. "It could allow us to address some interesting biological questions in the antibiotic resistance and evolution space."

Ekinci also found that when the amplitude of the bacteria's random movements was plotted against their frequency, a distinct, familiar pattern began to emerge.

"We saw that the fluctuations were focused at certain frequencies – they weren't like white noise," Ekinci said. Not quite white, but rather, something closer to pink.

1/f-type noise, also known as pink-like noise, is a recurring pattern in which the power spectral density of a signal is inversely proportional to its frequency. This occurs within a wide variety of systems, including biological processes such as the random firing of neuron channels and the electrocardiogram of a heart's rhythms, as well as in mechanical processes such as background noise in electronic devices and pitch progression in classical music.

"We think that there are several different time scales in the motion of these bacteria, and when you look at them collectively, you see 1/f-type behavior," Ekinci said.

In addition to the long-term goal of creating smaller, portable sensors, future work includes identifying the precise structural sources of vibrations, in order to develop a quantitative physical model of the noise and better understand the bacterial communication pathways.

"I want to make this more quantitative and determine the sources of these noises," Ekinci said. "I think this could be a useful tool for doing some fundamental studies."