News Staff
A new type of methane-based, oxygen-free life form can metabolize and reproduce similar to life on Earth.

This hypothetical cell membrane, modeled by a team of researchers, is composed of small organic nitrogen compounds and capable of functioning in liquid methane temperatures of 292 degrees below zero - necessary for a harsh, cold world - specifically Titan, the giant moon of Saturn, a planetary body awash with seas not of water, but of liquid methane, Titan could harbor methane-based, oxygen-free cells.

On Earth, life is based on the phospholipid bilayer membrane, the strong, permeable, water-based vesicle that houses the organic matter of every cell. A vesicle made from such a membrane is called a liposome. Thus, many astronomers seek extraterrestrial life in what's called the circumstellar habitable zone, the narrow band around the sun in which liquid water can exist. But what if cells weren't based on water, but on methane, which has a much lower freezing point?

The engineers named their hypothetical cell membrane an "azotosome," "azote" being the French word for nitrogen. "Liposome" comes from the Greek "lipos" and "soma" to mean "lipid body;" by analogy, "azotosome" means "nitrogen body." 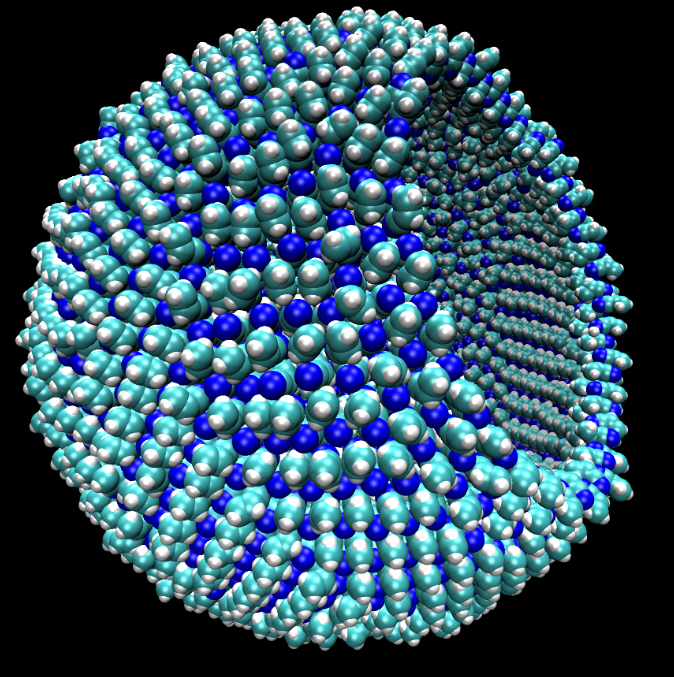 The azotosome is made from nitrogen, carbon and hydrogen molecules known to exist in the cryogenic seas of Titan, but shows the same stability and flexibility that Earth's analogous liposome does. This came as a surprise to chemists like Clancy and Stevenson, who had never thought about the mechanics of cell stability before; they usually study semiconductors, not cells.

The engineers employed a molecular dynamics method that screened for candidate compounds from methane for self-assembly into membrane-like structures. The most promising compound they found is an acrylonitrile azotosome, which showed good stability, a strong barrier to decomposition, and a flexibility similar to that of phospholipid membranes on Earth. Acrylonitrile - a colorless, poisonous, liquid organic compound used in the manufacture of acrylic fibers, resins and thermoplastics - is present in Titan's atmosphere.

"We're not biologists, and we're not astronomers, but we had the right tools," Clancy said. "Perhaps it helped, because we didn't come in with any preconceptions about what should be in a membrane and what shouldn't. We just worked with the compounds that we knew were there and asked, 'If this was your palette, what can you make out of that?'"