News Staff
The moon has no global magnetic field yet  Apollo astronauts found magnetized rocks on the lunar surface.

A new hypothesis proposes a mechanism that could have generated a magnetic field on the moon early in its history. The 'geodynamo' that generates Earth's magnetic field is powered by heat from the inner core, which drives complex fluid motions in the molten iron of the outer core.  The moon is too small to support that type of dynamo but the researchers write in Nature that an ancient lunar dynamo could have arisen from stirring of the moon's liquid core driven by the motion of the solid mantle above it.

They calculated the effects of differential motion between the moon's core and mantle. Early in its history, the moon orbited the Earth at a much closer distance than it does today, and it continues to gradually recede from the Earth. At close distances, tidal interactions between the Earth and the moon caused the moon's mantle to rotate slightly differently than the core. This differential motion of the mantle relative to the core stirred the liquid core, creating fluid motions that, in theory, could give rise to a magnetic dynamo. 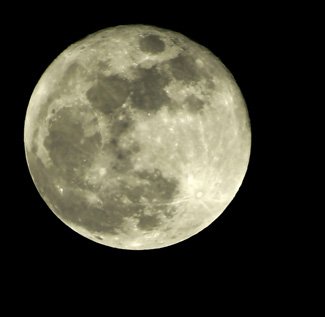 Lovely Luna may have had a magnetic field early in its history. Photo by Monica Murphy.

The moon wobbles a bit as it spins, that's called precession, but the core is partly liquid, and it doesn't do exactly the same precession. So the mantle is moving back and forth across the core, and that stirs up the core.

Christina Dwyer, a graduate student in Earth and planetary sciences at UC Santa Cruz, said,
"This is a very different way of powering a dynamo that involves physical stirring, like stirring a bowl with a giant spoon."

The researchers found that a lunar dynamo could have operated in this way for at least a billion years. Eventually, however, it would have stopped working as the moon got farther away from the Earth. "The further out the moon moves, the slower the stirring, and at a certain point the lunar dynamo shuts off," Dwyer said.

Rocks can become magnetized from the shock of an impact, a mechanism some scientists have proposed to explain the magnetization of lunar samples. But recent paleomagnetic analyses of moon rocks, as well as orbital measurements of the magnetization of the lunar crust, suggest that there was a strong, long-lived magnetic field on the moon early in its history.

"One of the nice things about our model is that it explains how a lunar dynamo could have lasted for a billion years," said Francis Nimmo, a professor of Earth and planetary sciences at UC Santa Cruz. "It also makes predictions about how the strength of the field should have changed over the years, and that's potentially testable with enough paleomagnetic observations."

More detailed analysis is needed, however, to show that stirring of the core by the mantle would create the right kind of fluid motions to generate a magnetic field. "Only certain types of fluid motions give rise to magnetic dynamos," Dwyer said. "We calculated the power that's available to drive the dynamo and the magnetic field strengths that could be generated. But we really need the dynamo experts to take this model to the next level of detail and see if it works."

A working model of a lunar dynamo, combined with more detailed paleomagnetic analysis of moon rocks, could give scientists a powerful tool for investigating the history of the moon, Dwyer said. In addition, the study presents a novel mechanism for generating a magnetic field not only on the moon, but also on other small bodies, including large asteroids.