Though methane stays in the atmosphere for far less time than CO2, it is 25X more potent during that period. Concerns about methane have risen because of concerns about possible leaks due to increased natural gas, which produces far less CO2 than coal, and that methane may be released as climate changes.

Researchers found that the methane detected in in lake sediments in this region can arise from both ancient theremogenic sources deep in the earth, or from shallow contemporary biological sources. Interestingly, the coastal plain in the North Slope of Alaska is estimated to contain 53-billion cubic feet of natural gas trapped under the permafrost ice cap. The work in Geobiology illustrates how the decomposition of organic matter in thermokast lake sediments can produce up to three times more biological methane gas emissions when subjected to increased temperatures in a simulated environment. 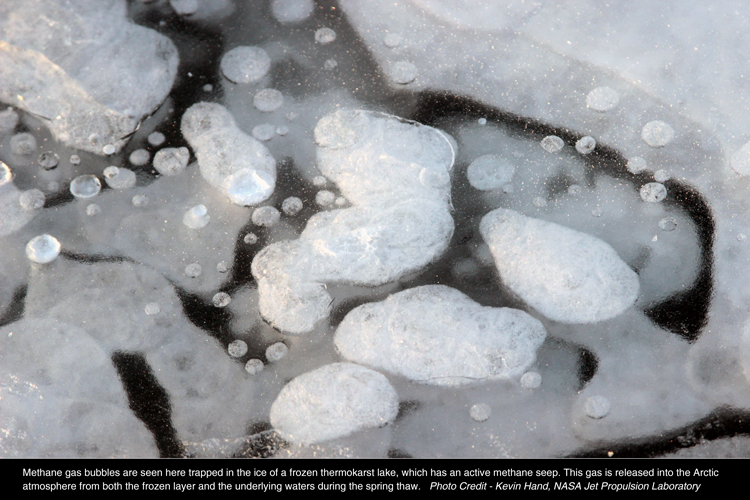 Methane gas bubbles are seen here trapped in the ice of a frozen thermokarst lake, which has an active methane seep. This gas is released into the Arctic atmosphere from both the frozen layer and the underlying waters during the spring thaw. Credit: Kevin Hand, NASA Jet Propulsion Laboratory

“The large amount of organic matter stored in the thaw layer between the water column and the permafrost table serves as a significant source of carbon for methanogensis,” explained Paula Matheus Carnevali, a doctoral student at Nevada’s Desert Research Institute and the study’s lead author. “Identifying and understanding the production sources of methane will improve our ability to generate accurate predictions about the changing climate in the Arctic.”

The study focused on methane dynamics within 16 sediment cores collected over a period of four years from two Alaskan thermokarst lakes, near Barrow, Alaska. Samples were obtained from three sites, one proximal to an active, submerged natural gas seep and another from a site approximately one-kilometer away from the seep site. The second lake was located about 13-km to the northwest, and did not have visibly active seeps.

Simulated climate scenarios were performed in a controlled DRI laboratory in Reno, Nevada and scientists analyzed the potential for increased biological production of methane from methanogens found in the lake sediments; the role of the sediment geochemistry in this process; and the temperature dependency of this process.

“This study marks an important step in recognizing that there are different methane sources in close proximity that may respond differently in the changing Alaskan arctic ecosystems,” said Alison Murray, Ph.D., a principal investigator on the study. “In scenarios of warming climate, our measurements indicate that biological methane production may play a larger role in total methane emissions in the future, which could have a significant impact on our climate.”