Induced pluripotent stem cells (iPSCs) became the target of researchers a decade ago due to restrictions on federal funding for human embryonic stem cells (hESCs). While media reports were claiming biology was dead if President Bush didn't violate President Clinton's Dickey-Wicker law, researchers instead moved to iPSCs and now they have been able to generate functional, three-dimensional human stomach tissue in a laboratory.

Thanks to advances, iPSCs can now become any cell type in the body and results were able to grow a miniature version of the stomach (called gastric organoids) to study infection by H. pylori bacteria, a major cause of peptic ulcer disease and stomach cancer.

This first-time molecular generation of 3D human gastric organoids (hGOs) presents new opportunities for drug discovery, modeling early stages of stomach cancer and studying some of the underpinnings of obesity related diabetes, according to Jim Wells, PhD, principal investigator and a scientist in the divisions of Developmental Biology and Endocrinology at Cincinnati Children's Hospital Medical Center.

It also is the first time researchers have produced 3D human embryonic foregut – a promising starting point for generating other foregut organ tissues like the lungs and pancreas, he said. 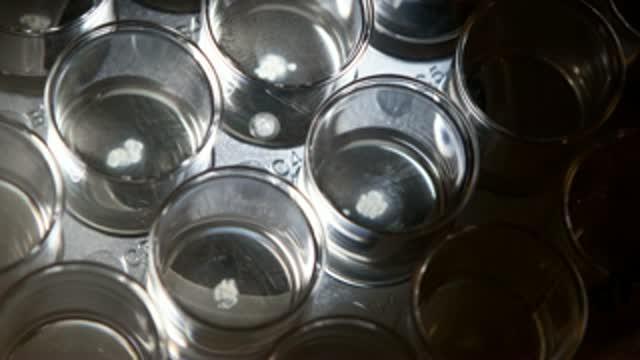 "Until this study, no one had generated gastric cells from human pluripotent stem cells (hPSCs)," Wells said. "In addition, we discovered how to promote formation of three-dimensional gastric tissue with complex architecture and cellular composition."

This is important because differences between species in the embryonic development and architecture of the adult stomach make mouse models less than optimal for studying human stomach development and disease, Wells added.

Researchers can use human gastric organoids as a new discovery tool to help unlock other secrets of the stomach, such as identifying biochemical processes in the gut that allow gastric-bypass patients to become diabetes-free soon after surgery before losing significant weight. Obesity fueled diabetes and metabolic syndrome are an exploding public health epidemic. Until now, a major challenge to addressing these and other medical conditions involving the stomach has been a relative lack of reliable laboratory modeling systems to accurately simulate human biology, Wells explained.

The key to growing human gastric organoids was to identify the steps involved in normal stomach formation during embryonic development. By manipulating these normal processes in a petri dish, the scientists were able to coax pluripotent stem cells toward becoming stomach. Over the course of a month, these steps resulted in the formation of 3D human gastric organoids that were about 3mm (1/10th of an inch) in diameter. Wells and his colleagues also used this approach to identify what drives normal stomach formation in humans with the goal of understanding what goes wrong when the stomach does not form correctly.

Along with study first author Kyle McCracken, an MD/PhD graduate student working in Wells' laboratory, and Yana Zavros, PhD, a researcher at UC's Department of Molecular and Cellular Physiology, the authors report they were impressed by how rapidly H. pylori bacteria infected stomach epithelial tissues.

Within 24 hours, the bacteria had triggered biochemical changes to the organ, according to McCracken. The human gastric organoids faithfully mimicked the early stages of gastric disease caused by the bacteria, including the activation of a cancer gene called c-Met and the rapid spread of infection in epithelial tissues.

Another significant part of the team's challenge has been the relative lack of previous research literature on how the human stomach develops, the authors said. Wells said the scientists had to use a combination of published work, as well as studies from his own lab, to answer a number of basic developmental questions about how the stomach forms. Over the course of two years, this approach of experimenting with different factors to drive the formation of the stomach eventually resulted in the formation of 3D human gastric tissues in the petri dish.

Wells emphasized importance of basic research for the eventual success of this project, adding, "This milestone would not have been possible if it hadn't been for previous studies from many other basic researchers on understanding embryonic organ development."