News Staff
New natural gas extraction using hydraulic fracturing (fracking) has been the biggest reason American CO2 emissions have dropped but it is not without controversy. Environmentalists have taken to videos showing 'flaming tapwater' and seek to blame natural gas for it.

Thousands of years ago those same phenomena were similar religious belief - gas and oil seeps have been part of cultural practices for thousands of years. From the Oracle at Delphi to the Chimera fires, people from Indonesia and Iran to Italy and Azerbaijan have studied and been mystified by “eternal flames”.

Modern geologists and oil and gas explorers can learn much by delving into the geo-mythological stories about the religious and social practices of the Ancient World, writes Giuseppe Etiope of the National Institute of Geophysics and Volcanology in Italy. Hydrocarbon seeps influenced the social and technological development of many ancient populations and were often the source of wars. The first evidence for petroleum usage comes from Syria, where the Neanderthal used natural bitumen on stone tools some 40,000 years ago. 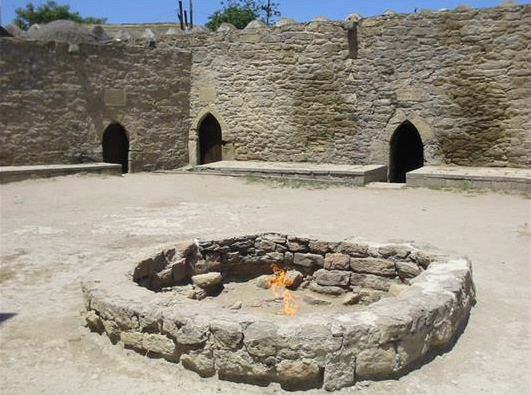 The “eternal flame” at the Zoroastrian Ateshgah “Fire Temple” near Baku, Azerbaijan. The temple was built over natural burning seeps that are today extinct. The flame in the photo is now artificially fed via a gas pipe. Active natural flames are instead found at Yanardag, located approximately 9 km NE. Credit: Giusepe Etiope

For those reasons, gas-oil seeps have been the source of mythological tales, and many a Biblical and historic event. The observations of ancient naturalists and historians such as Pliny the Elder, who lived two millennia ago, helped to chronicle many of these occurrences, especially in the Mediterranean area. For example, he wrote about Chimera, a large burning gas seep in modern day Turkey.. In ancient times, the temple of Hephaestus, the Greek god of fire, was built next to it.

Similar “eternal fires” integrated gas and flame emissions into ancient religious practices in many cultures. For instance, the Zoroastrians worshiped the “Pillars of Fire” near modern Baku in Azerbaijan. In Iraq, the Baba Gurgur seep was probably the “burning fiery furnace” into which King Nebuchadnezzar cast the Jews. A legend of ancient Rome reports a stream of crude oil issuing from the ground around 38 BC. It became a meeting spot for the first Roman converts to Christianity, and is now the site for the Basilica of Santa Maria in Trastevere. The sacred Manggarmas flame in Indonesia, which has been active at least since the 15th century, is still used in an annual Buddhist ceremony.

“Knowing that a certain ‘eternal fire’ observed today was already active in Biblical times indicates that it was not triggered by the recent drilling and production of petroleum,” adds Etiope.