New research findings may help refine the accepted models used by earth scientists over the past 30 years to describe the ways in which continents clash to form the Earth's landscape.

Eric Calais, an associate professor of geophysics at Purdue University, in collaboration with Ming Wang and Zenghang Shen from the Institute for Geology and Earthquake Science in China, used global positioning systems to record the precise movements of hundreds of points on the continent of Asia over a 10-year period. 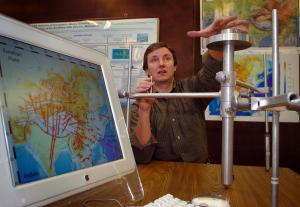 Eric Calais, a Purdue associate professor of geophysics, shows equipment he used to track movements of the continent of Asia over a 10-year period. In his right hand, Calais holds an example of the geodetic markers he and his team drilled into the Earth's surface to track movements as small as one millimeter. The data he collected addressed the 40-year debate over how continents respond during collisions of tectonic plates. (Purdue News Service photo/David Umberger)

"Prior to this, we had only partial regional views that were sometimes inconsistent with each other," Calais said. "With this work, we addressed a fundamental question that geologists have been debating for the past 40 years: Are continents strong and brittle or weak and viscous?"

The "strong and brittle" theory suggests continents break into pieces during collisions of the tectonic plates, pieces of the Earth's crust into which the continents are embedded. The "weak and viscous" theory suggests, on the contrary, that continents thicken and flow upon collision.

The data collected by Calais and his team, reported in the Dec. 30 issue of Geophysical Research Letters, suggests the answer is a combination of both theories. His team found that the surface of the Asian continent behaves differently in areas of high elevation, such as mountains.

"We found that most of Asia is very strong and breaks like a ceramic plate, much like what would be predicted by classic plate tectonics, but there also are large chunks like Tibet and the Tien Shan mountains that seem to deform more like Play-Doh," he said.

The Indian and Eurasian tectonic plates collide at a rate of 38 millimeters, or about one and one-half inches, per year. This slow-motion crash is responsible for the formation of the Himalayas and holds up the Tibetan Plateau, Calais said.

"These movements happen slowly over millions of years, but the impact is tremendous because of the huge masses involved," he said. "When the Earth's crust is put under stress, it deforms. Like a rubber band, the crust can only take so much stress before it breaks, causing an earthquake. We must understand the stresses and their accumulation in the Earth's crust to better understand earthquakes and, eventually, save lives."

The continent of Asia, home to more than 3 billion people, has had some of the largest earthquakes in the recent past, but areas in the United States also are deforming.

"The western third of North America is seismically active," Calais said. "The most well-known area is along the San Andreas Fault in California, but there also is deformation occurring across the Nevada desert, along the Wasatch Mountains in Utah, and further south in Colorado and New Mexico. The National Science Foundation is currently funding a large research effort called the "Plate Boundary Observatory" to apply this same method to study the Western United States."

Calais and his team gathered data from geodetic markers, metal pins about the size of a pen, that they placed in some of the most remote areas of the world, including Siberia and Mongolia. The markers remain in place for use in future studies. They are surveyed for a few days every year by GPS tracking equipment, which is then removed once the data is collected. The tops of the markers have a 1-millimeter-wide dimple that is the actual point tracked by the equipment.

The team tracked changes in height and horizontal movements and compared each site to those surrounding it to determine if the larger area responded to forces as a rigid or malleable segment. If the movement of sites within an area was consistent with a rigid rotation, it could be confirmed that the area fit the strong and brittle theory. However, a change in height did not necessarily mean an area fit the weak and viscous theory, Calais said.

"The change in height of an individual site could be a sign of thickening or it could mean that a rigid block is uplifting as a whole," he said. "We had to look at the behavior of the neighboring sites as well to accurately understand what was happening to the area as a whole."

The team also pulled data from existing tracking stations and through contributions from collaborators, including scientists in Russia and Kirgistan.

"International collaboration was essential for us to achieve a complete view of the surface deformation of the continent," Calais said.

The precision of the team's techniques and use of GPS allowed researchers to track movement as small as 1 millimeter per year. The team plans to place additional GPS tracking points to increase the resolution of their continentwide measurements in the future.

"This is beyond plate tectonics and theories," he said. "We now have the ability to directly measure how continents deform and to use that information to validate or invalidate theories of why this happens."

Note: This article has been adapted from a news release issued by Purdue University.