The village of Nichoria in Messenia was located near the palace of Pylos during the Greek Bronze Age, when Greece was considered a Superpower of the Mediterranean. The region thrived on its trade and economic stability, culture, and art and architecture, including great monuments, palaces and writings. The collapse of the Bronze Age (beginning around 1,200 BC), including the abandonment of cities and the destruction of palaces, is known as the Greek Dark Age.

Nichoria remained through both the Late Bronze Age and the Greek Dark Age, and scholars have suggested that it turned to cattle ranching during the region's collapse. That made sense, the remains of cattle bones are prevalent among bone fragments in the soil.

New research suggests that soil formation after the abandonment of the site in the Dark Age led to poor preservation of the historic record, and as a result, the thicker, larger bones of animals such as cattle survived the breakdown of other bone fragments. Other possible remains would have been destroyed as a result of the more acidic soil. The researchers report that Dark Age sediments contain few visible calcite formations, indicative of poor site preservation. 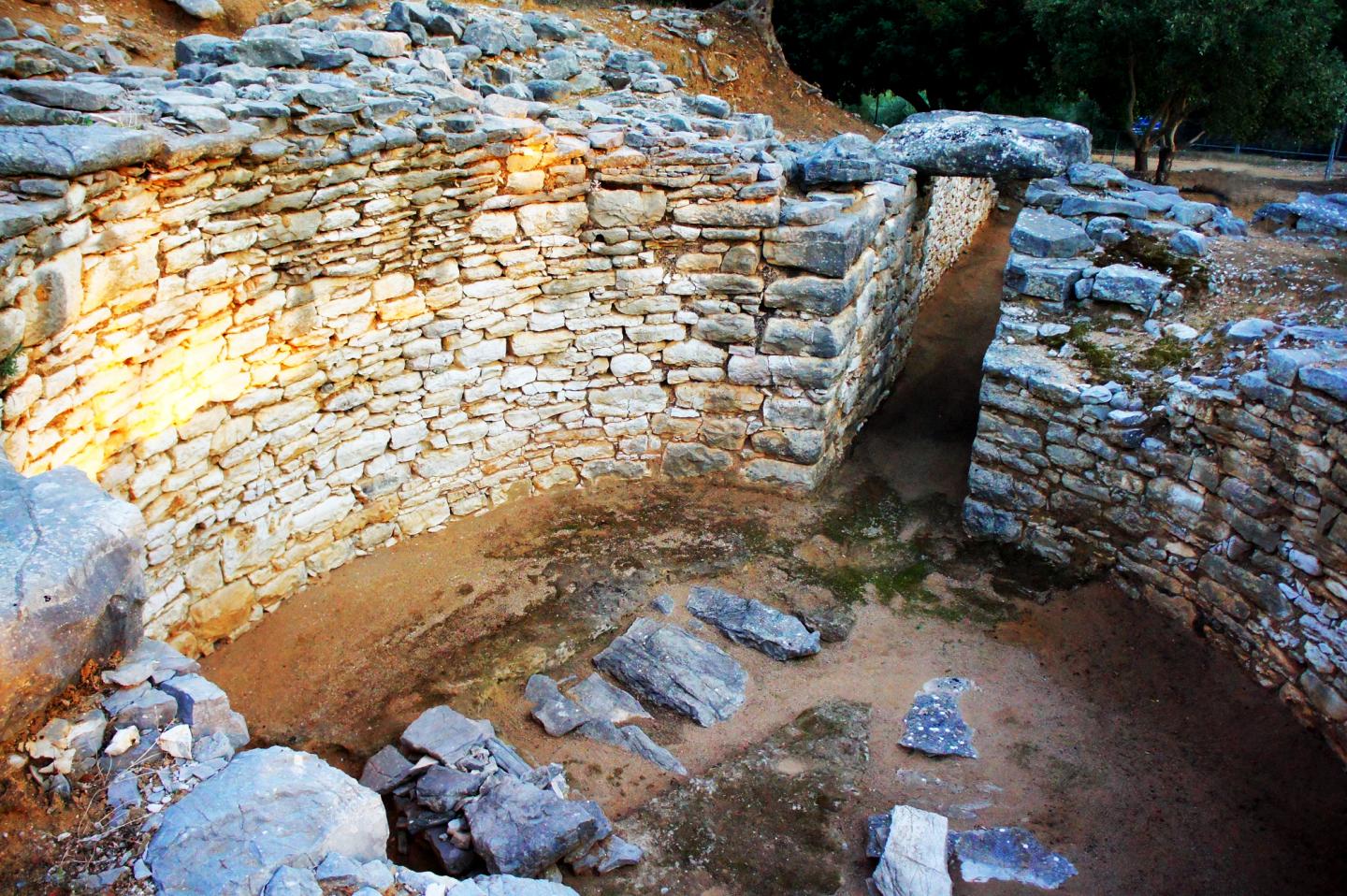 Bronze Age tomb at Nichoria from above. Credit: Jonida Martini

"There's no monumental architecture and little art, writing disappears and there are considerably fewer sites," says Dibble. He explains that Nichoria is one of the few settlements in Greece that remained occupied during both the Bronze Age and the Greek Dark Age. It's believed that the widespread abandonment of settlements was due to the adoption of pastoralism, making populations more mobile as they herded animals.

The explanations for the sudden collapse of civilization in the Dark Age have ranged from believing it was the result of the invasion of another society to a catastrophic climatic event.

"We were exploring this as evidence for a possible climate event, but the soil samples came back inconclusive," says Dibble. "We actually think that as more of these sites are abandoned in the Dark Age, the landscape becomes very stable, and the weather destroys more of what's in the top upper layers than the archaeological material buried deeper below. At this site, we have no evidence that the destruction of bone was the result of climate change."

Previous research from the first excavation of Nichoria in the late '60s - an extensive project led by the University of Minnesota - has suggested that Nichoria survived the Dark Age by turning to cattle ranching, after villagers took control of the herds of the palaces in the wake of their collapse.

Dibble says that the evolution of methods and technology has resulted in new examinations of discoveries from decades ago. "We're using modern biology to understand what is happening to ancient remains and we're finding that the bone is dissolving away. I've found teeth that are hollow because the dense enamel is still there, but the dentin is gone, which also tells me that more porous bone is dissolving away."

Dibble adds that their study is unique in that soil that was collected with the bones was also studied before being washed away to better examine the bones. Fallu conducted the examinations of the soil. Concerning the fact that many bags of bones still had dirt, Dibble says, "We got kind of lucky in a sense."

"I want to see if this kind of soil environment that destroys bones also destroys other types of evidence, because there is bone destruction at other sites being studied from the Dark Age," says Dibble. "Bone is made up of calcium carbonate, so other carbon materials could be destroyed, such as charred plants - key to understanding agriculture at that time. Also, there are few metal objects from the Dark Age, and the soil environment might be an explanation for that."

"The Good, the Bad and the Ugly at the Dark Age Ranch: Taphonomic Reinterpretations of Pastoralism at Nichoria, Messinia,"
- upcoming at the joint annual meeting of the Archaeological Institute of America (AIA) and Society for Classical Studies (SCS, formerly known as the American Philological Association), in New Orleans later this week.