At first glance, water seems to be a simple molecule because a single oxygen atom is bound to two hydrogen atoms - but it is more complex when taking into account hydrogen's nuclear spin, a property reminiscent of a rotation of its nucleus about its own axis.

The spin of a single hydrogen can assume two different orientations, symbolized as up and down. So, the spins of water's two hydrogen atoms can either add up, called ortho water, or cancel out, called para water. Ortho and para states are also said to be symmetric and antisymmetric, respectively.

Fundamental symmetry rules prohibit para water from turning into ortho water and vice versa – at least theoretically.  But using an "electric prism", researchers from the Center for Free-Electron Laser Science (CFEL) – a collaboration of DESY, the Max Planck Society and Universität Hamburg - have done just that.  They have found a new way of separating water molecules that differ only in their nuclear spin states and, under normal conditions, do not part ways. 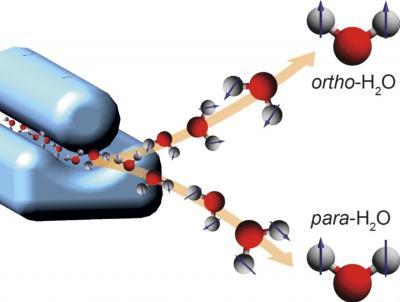 Researchers have separated the nuclear spin states of water. In para water, the spins (depicted as arrows) of water's two hydrogen nuclei cancel out. They add up in ortho water. The scientists produced an ultracold, supersonic beam of water molecules -- a mixture of para and ortho water -- and sent it through an electric deflector (blue device on the left). The deflector acts as a prism for nuclear spin states, separating para and ortho water molecules in space (right). Credit: Daniel A. Horke, CFEL/DESY

"If you had a magic bottle with isolated para and ortho molecules, they would remain in their spin states at all times," says DESY scientist Jochen Küpper who led the recent study. "In principle, they are different molecular species, different types of water." However, in the real world, water molecules are not isolated and frequently collide with other molecules or surfaces in their vicinity, causing nuclear spin orientations to change.

"Through these interactions, para and ortho water can actually transform easily into one another," explains Küpper who is also a professor at the University of Hamburg and a member of the Hamburg Centre for Ultrafast Imaging (CUI). "Therefore, it is very challenging to separate them and produce water that is not a mixture of both."

Yet, the CFEL researchers have now demonstrated a way of isolating para and ortho water in the lab. To start, the scientists placed a drop of water in a compartment, which they pressurized with neon or argon gas. This mixture was released into vacuum through a pulsed valve. "Due to the large pressure difference, the gas expands quickly into the vacuum when the valve is opened, dragging along water molecules and, at the same time, cooling them down," says Daniel Horke, the first author of the study.

This expansion produces a narrow beam of ultracold water molecules, which propagate at supersonic speed and are so dilute that individual molecules no longer collide with each other, thereby suppressing the conversion between para and ortho spin states.

The molecular beam then travels through a strong electric field, which deflects the water molecules from their original flight path and acts like a prism for nuclear spin states. "Para and ortho water interact with the electric field differently," Horke explains. "Thus, they also get deflected differently, allowing us to separate them in space and obtain pure para and ortho samples." Spectroscopy showed that the purity of the para and ortho water was 74 per cent and over 97 per cent, respectively. Especially for para water the purity can be greatly enhanced in the future, as Horke says. Storing the separated water species was not an aim of the study.

The new method could benefit studies of a wide range of phenomena. In astrophysics, for example, it is commonly assumed that the relative amounts of para and ortho species can be linked to the temperature of interstellar ice. This theory is based on the temperature dependence of hydrogen's ortho-to-para ratio, which is three to one at room temperature and drops with decreasing temperatures. "In fact, certain regions of the universe exhibit ratios that are quite different from what you would expect," Horke says. "Yet, the specific reasons are unknown and lab-based experiments could provide new insights."

Back on Earth, the study may also help determine the structures of proteins – biomolecules that are essential to all life. A method known as nuclear magnetic resonance (NMR) spectroscopy reconstructs protein structures from the relative orientation of the nuclear spins of hydrogen and other atoms. "Para hydrogen has successfully been used to enhance the sensitivity of the NMR method," says Horke. "Thus, enriching para water in a protein's water shell could become an interesting approach to improve NMR spectroscopy of these biological systems due to an almost natural environment."