Tampa, FL (Feb. 6, 2014) – Declines in the underlying brain skills needed to think, remember and learn are normal in aging. In fact, this cognitive decline is a fact of life for most older Americans.

Therapies to improve the cognitive health of older adults are critically important for lessening declines in mental performance as people age. While physical activity and cognitive training are among the efforts aimed at preventing or delaying cognitive decline, dietary modifications and supplements have recently generated considerable interest.

Now a University of South Florida (USF) study reports that a formula of nutrients high in antioxidants and other natural components helped boost the speed at which the brains of older adults processed information.

The USF-developed nutritional supplement, containing extracts from blueberries and green tea combined with vitamin D3 and amino acids, including carnosine, was tested by the USF researchers in a clinical trial enrolling 105 healthy adults, ages 65 to 85.

The two-month study evaluated the effects of the formula, called NT-020, on the cognitive performance of these older adults, who had no diagnosed memory disorders.

The study, conducted at the USF Health Byrd Alzheimer's Institute, appears in the current issue of Rejuvenation Research (Vol. 17 No. 1, 2014). Participants from both groups took a battery of memory tests before and after the interventions. University of South Florida researchers Paula Bickford, Ph.D., and Brent Small, Ph.D., teamed up to investigate the effects of a USF-developed, antioxidant-rich nutritional supplement on the cognitive performance of older adults.

Blueberries, a major ingredient in the NT-020 formula, are rich in polyphenols, a type of antioxidant containing a polyphenolic, or natural phenol substructure.

"The basis for the use of polyphenol-rich nutritional supplements as a moderator of age-related cognitive decline is the age-related increase in oxidative stress and inflammation," said study co-principal investigator Paula C. Bickford, PhD, a professor in the Department of Neurosurgery and Brain Repair, USF Health Morsani College of Medicine, and senior research career scientist at the James A. Haley Veterans' Hospital in Tampa, FL. "Non-vitamin polyphenols are the most abundant modulators of oxidative stress and inflammation in our diet. NT-020 is 95 percent polyphenols."

In several preclinical trials, researchers gave aging laboratory rats NT-020 to see if it boosted memory and other cognitive performance by promoting the health of neurons in the aging brain. Those studies demonstrated that NT-020 promoted the growth of stem cells in the brain, produced an overall rejuvenating effect, benefitted animals with simulated stroke, and led to better cognitive performance.

The researchers plan future clinical trials with longer intervention periods so that the optimal time for taking the formula may be better understood. The researchers speculated that if the study had included participants cognitively less healthy, or those with memory impairments, they may have observed "more robust findings."

"In the future, having markers of oxidative stress and inflammation, as well as brain-based measures of functioning, may allow us to identify the manner by which this compound, as well as others, may influence functioning," they concluded.

The NT-020 formula was patented by the University of South Florida, in partnership with the James A. Haley Veterans' Hospital, and licensed to Natura Therapeutics, Inc. The supplement is commercially available as NutraStem®. 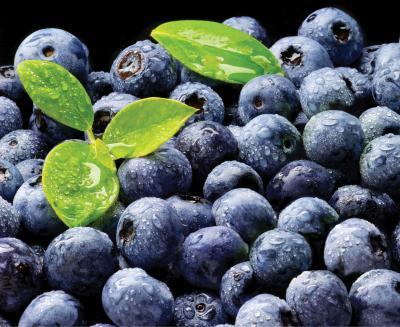 One of the main ingredients of the patented nutritional supplement, called NT-020, is extracted from blueberries. (Photo Credit: © University of South Florida)