News Staff
A recently published study offers new clues about the evolution of the immune system in European populations of the plant Arabidopsis thaliana and the underlying genetic mechanisms associated with immunity.
The species Arabidopsis thaliana, which is naturally distributed across the northern hemisphere, belongs to the same family than mustard. The species is used as model in plant biology studies because its genome is relatively small and appropriate for genetic studies.

The natural evolution of resistance (R) genes in plants can cause autoimmunity when combined with different genetic backgrounds. This phenomenon is called immune-related hybrid incompatibility (HI); it leads to growth inhibition and fitness loss due to inappropriate activation of defence. HI likely reflects different evolutionary paths of immune-related genes in nature. However, it is not clear if divergent paths are due to local adaptation or a result of genetic drift, in other words, the change in the frequency of a gene variant (allele) in a population due to random sampling. 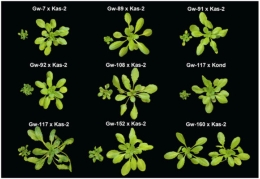 In the study, researchers have examined the genetic architecture of a group of resistance genes present in the Central European Arabidopsis thaliana strain Landsberg. This strain is not compatible with Central Asian ones; in other words, there is a genetic mechanism that hampers hybrid growth. “We show that expression of one gene (R3) within the Landsberg cluster of eight tandem R genes (R1–R8) controls the balance between growth and defence ,but that R3 needs at least one other co-acting member within the R locus to condition the incompatibility with Central Asian strains,” explains Rubén Alcázar from the University of Barcelona.

Researchers traced the R1–R8 haplotype to a local population of Arabidopsis Landsberg relatives where it also underlies hybrid incompatibility with Central Asian accessions. Occurrence of the incompatible haplotype in 30% of genetically diverse local individuals, suggests that it has not arisen recently and has been maintained through selection or drift for several decades.

Co-occurrence in the same population of individuals containing different resistance genes that do not cause HI provides a basis for determining genetic and environmental forces influencing how plant immunity genes evolve and diversify.