Ontogeny Recapitulates Phylogeny - Except For This Strange-Looking Head
By News Staff | September 15th 2014 09:31 AM | Print | E-mail

Today our understanding a more nuanced and a better way to figure out how animals evolved is to compare regulatory networks that control gene expression patterns, particularly embryonic ones, across species.  But that task can be humbling, according to Stowers Institute for Medical Research Scientific Director Robb Krumlauf, Ph.D. and colleagues, who show that the sea lamprey Petromyzon marinus, a survivor of ancient jawless vertebrates, exhibits a pattern of gene expression that is reminiscent of its jawed cousins, who evolved much, much later.

Those genes, called Hox genes, function like a molecular ruler, determining where along the anterior-posterior (AP) axis an animal will place a particular feature or appendage. The new study means that that the genetic program used by jawed vertebrates, including fish, mice, and us, was up and running ages before a vertebrate ever possessed a recognizable face. 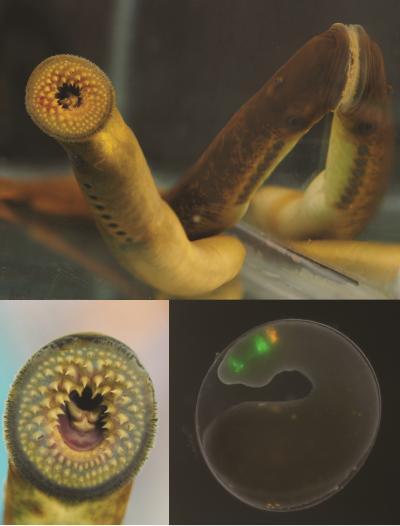 "Hox genes regulate a tissue's character or shape, as in head or facial features. Our work in the past has addressed how factors make unique structures, for example, what makes an arm different from a leg," says Krumlauf. "Now, we are excited by the common role that similar sets of genes play in creating a basic structural plan."

The team at Stowers and Caltech focused on the sea lamprey because the fossil record shows that its ancestors emerged from Cambrian silt approximately 500 million years ago, 100 million years before jawed fish ever swam onto the scene. The question was, could the hindbrain gene regulatory network that constructs the "modern" vertebrate head have originated in animals that lack those structures?

To answer it, the researchers created so-called "reporter" genes from stretches of regulatory DNA flanking a specific Hox gene in zebrafish or mice and linked them to fluorescent tags. When inserted into an experimental animal these types of reporters glow in tissues where the gene is activated, or "expressed". The researchers chose this particular battery of Hox reporters because when inserted in embryos of a jawed fish they fluoresce in adjacent rainbow stripes up and down the embryonic hindbrain.

The paper's startling finding came when they inserted the very same reporters into lamprey embryos using a technique developed by Hugo Parker, Ph.D., a postdoctoral fellow in the Krumlauf lab and the study's first author: the lamprey embryos displayed the same rainbow pattern of Hox reporters as did jawed fish, in exactly the same order along the AP axis of the hindbrain.

"We were surprised to see any reporter expression in lamprey, much less a pattern that resembles the pattern in a mouse or fish," says Parker, who pioneered the lamprey reporter approach as a graduate student at London's Queen Mary University. "That means that the gene regulatory network that governs segmental patterning of the hindbrain likely evolved prior to divergence of jawed vertebrates."

Researchers knew that in mouse and zebrafish short stretches of DNA in one Hox reporter (Hoxb3) formed a landing pad recognized by a DNA-binding protein that flips on the gene. As you would expect, when inserted into zebrafish embryos, reporters mutant in those sequences were inactive (they didn't glow) in the hindbrain. Remarkably, the mutant reporter was inactive in lamprey embryos also, meaning that this control switch has been around for a very long time.

"These results suggest that regulatory circuits controlling hindbrain patterning were likely 'fixed in place' in ancient vertebrates," says Bronner. Some may find this surprising, as adult mammals (like us!) bear absolutely no resemblance to lampreys. "However, embryos of lamprey and other vertebrates show many striking similarities, so it makes sense that there are features common to all."