Astronomers have studied the carbon monoxide in ALESS65, a galaxy over 12 billion light years away, and found that it's literally running out of gas. The future is not dark, it's 'red and dead'.

ALESS65 was observed by the Atacama Large Millimeter Array (ALMA) in 2011 and is one of few known distant galaxies to contain carbon monoxide.

While our galaxy, the Milky Way, has about 5 billion years before it runs out of fuel and becomes 'red and dead', ALESS65 is a gas guzzler and only has 10s of millions of years left – that is very rapid, in astronomical terms. 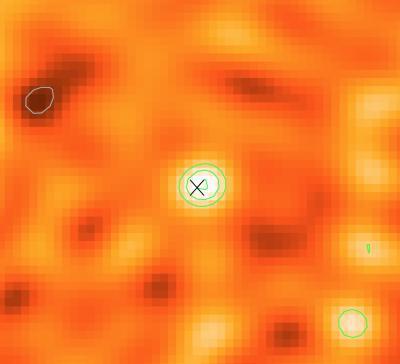 "We're familiar with carbon monoxide here on Earth as the deadly gas that can cause suffocation, but in galaxies it plays an important role in the lifecycle of stars," said  Dr. Minh Huynh from The University of Western Australia node of the International Centre for Radio Astronomy Research (ICRAR). "Out of the galaxies that we know contain carbon monoxide, less than 20 are as far away from Earth as ALESS65. Out of the billions of galaxies out there, the detections are very rare!"

Huynh
and colleagues combined the ALMA results with those of the Australia Telescope Compact Array (ATCA) radio telescope in NSW, Australia, to work out how much carbon monoxide they could see in ALESS65 and extrapolated that out into how much fuel the galaxy has left – how much gas it has.

"We were able to work out the strength of the UV radiation in ALESS65; it's similar to some 'starbursting' galaxies in the local universe, but the stars in ALESS65 are forming in much larger areas when compared to local galaxies," said Huynh.

The team will now turn their attentions to the search for carbon monoxide in another galaxy near to ALESS65, named ALESS61.

"Finding and studying carbon monoxide in more galaxies will tell us even more about how stars formed in the early days of the Universe and help solve the mystery of far away 'red and dead' galaxies" said Huynh. NGC5044, a "red and dead" galaxy like ALESS65 will become in about 25 million years. (The X-Rays are shown in blue and the visible light is shown in yellow. Credit: : X-ray: NASA/CXC/Stanford Univ/N.Werner et al; Optical: DSS