News Staff
A new robot house will be launched at the University of Hertfordshire tomorrow, Wednesday 27 Mayth.

Professor Kerstin Dautenhahn and her team at the University’s School of Computer Science have taken their robots out of their laboratory and have them “living” in a house in Hatfield, so that the academics can develop them as personal companions.  The academics will open the robot house to the media tomorrow, before launching it to the public in early June.

At the event, the academics will showcase the work they are doing to advance the relationship between robots and humans as part of the European project LIREC – Living with Robots and Interactive Companions. Different robots with mechanical and/or humanoid features will be shown. 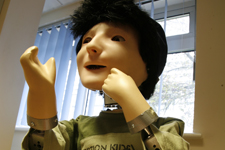 Kaspar, one of the robots created by Hertfordshire researchers.

They will explain how they are investigating specifically how people can interact with robots of different appearances and behaviour, and how a robotic ‘mind’ can migrate to other robots or computer devices. They will also showcase research that studies how interactive and more “toy-like” robots can be used to enhance remote human-human communication via the internet.

The scientific vision of this research is to develop companion robots that can not only serve as useful assistants in the home but that also behave in a manner that is socially acceptable and comfortable to its users.