News Staff
Display screens are everywhere but convenience needs are going up, not down, and people are wanting to break free of rigid monitors. The race is on to develop computer displays that can be easily rolled up and put away rather than requiring a flat surface for storage and transportation.

A new study suggests that a novel DNA-peptide structure can be used to produce thin, transparent, and flexible screens. The research, conducted researchers at Tel Aviv University, harnesses bionanotechnology to emit a full range of colors in one pliable pixel layer, as opposed to the several rigid layers that constitute today's screens.

The researchers tested different combinations of peptides: short protein fragments, embedded with DNA elements which facilitate the self-assembly of a unique molecular architecture. Peptides and DNA are two of the most basic building blocks of life. Each cell of every life form is composed of such building blocks. In the field of bionanotechnology, scientists utilize these building blocks to develop novel technologies with properties not available for inorganic materials such as plastic and metal. 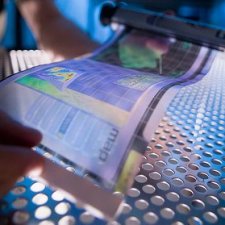 "Our material is light, organic, and environmentally friendly," said Professor Ehud Gazit. "It is flexible, and a single layer emits the same range of light that requires several layers today. By using only one layer, you can minimize production costs dramatically, which will lead to lower prices for consumers as well."

"Our lab has been working on peptide nanotechnology for over a decade, but DNA nanotechnology is a distinct and fascinating field as well. When I started my doctoral studies, I wanted to try and converge the two approaches," said doctoral student Or Berger. "In this study, we focused on PNA - peptide nucleic acid, a synthetic hybrid molecule of peptides and DNA. We designed and synthesized different PNA sequences, and tried to build nano-metric architectures with them."

Using electron microscopy and X-ray crystallography, the researchers discovered that three of the molecules they synthesized could self-assemble, in a few minutes, into ordered structures. The structures resembled the natural double-helix form of DNA, but also exhibited peptide characteristics. This resulted in a very unique molecular arrangement that reflects the duality of the new material.

"Once we discovered the DNA-like organization, we tested the ability of the structures to bind to DNA-specific fluorescent dyes," said Berger. "To our surprise, the control sample, with no added dye, emitted the same fluorescence as the variable. This proved that the organic structure is itself naturally fluorescent."

The structures were found to emit light in every color, as opposed to other fluorescent materials that shine only in one specific color. Moreover, light emission was observed also in response to electric voltage -- which make it a perfect candidate for opto-electronic devices like display screens.

The work was funded by and  patented by the Momentum Fund of Ramot of TAU and the researchers are currently building a prototype of the screen.
News Articles
More Articles All Articles
About