News Staff
The world population, which stood at 5 billion in 1950, will likely increase to 10.5 billion by 2050, meaning that the planet’s population will have doubled within the lifetimes of many people alive today.

Beginning in the 1960s, environmental groups and their Doomsday Prophets, including Berkeley's Dr. Paul Ehrlich and current U.S. White House Science 'Czar' Dr. John Holdren, began projecting food riots and mass starvation and advocated for forced sterilization and other schemes to stave off the apocalypse.

Instead, scientists simply optimized food. Dr. Norman Borlaug, one of the founders of the American Council on Science and Health and a Nobel laureate for creating the Green Revolution, and others boosted food using science. Since then, legacy genetic modification techniques like mutagenesis and hybridization have been surpassed by precise genetic engineering.

The result has been an increase in the harvest index (the amount of the plant’s biomass partitioned into grain) with far less environmental strain than ever thought possible. Today’s ears of corn are huge compared to those harvested in the 1920s. 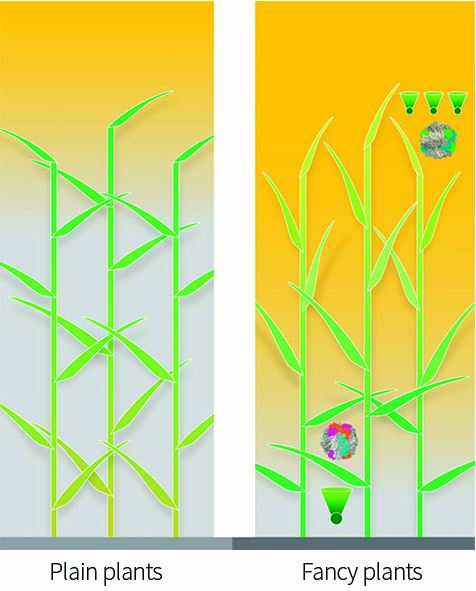 In an optimized canopy (right), leaves at the top, which receive too much light, might tilt vertically and have smaller and fewer light-gathering antennas (green cones) feeding many reaction centers. Those lower in the canopy would have larger antennas feeding fewer reaction centers. The leaves at the top would have a variant of RuBisCO, an important enzyme in photosynthesis, that had high catalytic activity but not be particularly good at distinguishing carbon from oxygen, whereas those at the bottom might have RuBisCO variants that were slower but less inclined to pick up oxygen instead of carbon. Based on Zhu et al.

Is there another rabbit plant scientists can pull out of the hat? One possibility is to redesign photosynthesis, the process by which plants convert sunlight and carbon dioxide into sugar and the ultimate source of all food, unless you’re a chemosynthesizing bacterium.

Photosynthesis, scientists will tell you, is stunningly inefficient. “We expect the solar cells we put on our rooftops to be at least 15- or 20- percent efficient,” said Robert Blankenship, PhD, the Lucille P. Markey Distinguished Professor of Arts and Sciences at Washington University in St. Louis. “A plant is at best one-percent efficient.”

Photosynthesis is the only determinant of crop yields that is not close to its biological limits, he said. It’s the one parameter of plant production that has not been optimized.

“A plant is probably never going to reach solar cell efficiencies, but solar cells are not going to make you lunch,” Blankenship said. “If we can double or triple the efficiency of photosynthesis — and I think that’s feasible — the impact on agricultural productivity could be huge.”

But how could this be done? In May 2013 Donald Ort and Sabeeha Merchant organized a workshop at Cold Spring Harbor Laboratory where a group of the world’s top plant scientists slipped the leash of scientific caution and tried to imagine what they would do if they could redesign plants at will. Blankenship was a workshop participant and agreed to summarize some of ideas that came out of the workshop, which are described in more detail in an article published in the July 14 issue of Proceedings of the National Academy of Sciences.

One clever idea was to design a smart canopy, a layered canopy of plants that would interact cooperatively to maximize photosynthetic efficiency. The canopy might exploit several tricks to wring the maximum productivity out of light as it filtered through the leaves to the ground.

One way to minimize light saturation of the upper leaves and light starvation of the lower leaves is to vary the angle of the leaves in the canopy. Leaves in high light might be nearly vertical while those beneath might be horizontal. 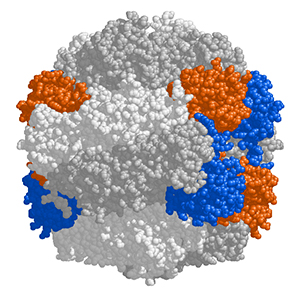 The light is absorbed in each leaf by “antenna” pigments, typically chlorophyll and the carotenoids. These antennas channel the energy to reaction centers where the chemistry takes place. A plant can have up to several hundred pigment molecules per reaction center.

If plants had antenna complexes sized for the light intensity at their level of the canopy they could absorb light more judiciously. The upper leaves that get lots of light would have fewer antenna complexes feeding more reaction centers and would be pale green. Descending through the canopy the leaves would have larger antennas feeding fewer reaction centers and shade to darker green.

But it isn’t just the light intensity that changes with depth in the canopy; it’s also the solar spectrum. Plants only use a very narrow region of the solar spectrum, Blankenship said. “Basically the plant sees the same light we see with our eyes. Anything on either side of it is just completely wasted — not even absorbed — so it doesn’t even have a chance to do anything.”

That’s basically why solar cells are more efficient than plants, he said. They use some of the other light, the light in the near infrared.

So a third idea is to plug different light-absorbing pigments into different levels of the canopy. High up the antenna complexes might still be composed of the familiar chlorophyll a, which absorbs in the visible part of the spectrum, but farther down, where the leaves mainly receive infrared light, chlorophyll a might be replaced by chlorophyll d, whose absorption peaks deeper in the red.

Having explored ways to tailor light collection to the intensity and spectrum of the available light, the scientists then turned to the next major barrier to improving photosynthetic productivity. This is the infamous enzyme RuBisCO.

RuBisCO catalyzes the first major step in carbon fixation, the process by which the carbon atom in atmospheric carbon dioxide is added to a carbon molecule. RuBisCO has two flaws. One is that for a catalyst, a molecule whose job is to speed up reactions, it is very slow. “It turns over a few times a second,” Blankenship said, “which is really, really slow. Some enzymes will turn over tens of millions of times per second.”

RuBisCO is so poky that huge amounts of it (half the soluble protein in leaves) is required to support adequate photosynthetic rates. The other flaw is that RuBisCO is not very good at discriminating between carbon dioxide and oxygen. If it latches on to oxygen, which happens 25 to 30 percent of the time, the carbon-fixation reactions spit out a compound called glycolate that is toxic and must be removed. The reaction cycle by which it is removed, called photorespiration, is long, complicated and a major drain on the efficiency of the plant, Blankenship said.

In many plants, a third of the carbon dioxide the plant fixes is lost again through photorespiration. “Sometimes people try to argue that photorespiration has some benefit but in the end I don’t think many people believe it,” he said.

There are many natural variants of RuBisCO, Blankenship said, which represent different tradeoffs between the enzyme’s rate and its specificity. If the enzyme distinguishes well between oxygen and carbon dioxide, then it tends to be slow, and if it works really fast, then it isn’t as selective.

So one idea would be to put RuBisCOs with a high catalytic rate in the upper canopy to make the most of the abundant light and ones with high specificity in the lower canopy to minimize losses through photorespiration where light is limited, he said.

Another is to equip plants with a specialized carbon fixation system found in a minority of plants. These plants concentrate their RuBisCO in specialized cells and pumping carbon dioxide into those cells to keep its concentration high. (They are said to have C4 metabolism, in contrast to the majority of plants, which have C3 metabolism; the names refer to the numbers of carbon atoms in intermediate products of the reactions that manufacture sugar.)

There’s a lot of interest in putting C4 metabolism (the carbon concentrating adaptation) into C3 plants like rice, said Blankenship. “That’s the big goal: to make C4 rice. It’s an international effort involving many groups. All of the enzymes needed to do C4 photosynthesis are already in the plant. It’s just a matter of putting them in the right place and turning them on at the right time.

In a smart canopy the top layers might be carbon-concentrating and the lower layers, where there is less energy to pump carbon dioxide, might settle for carbon dioxide transport by diffusion.

Some of these projects are fairly easy, Blankenship said, and could be accomplished within a few years, but others would require radical redesigns or a major rethinking of the architecture of photosynthesis.

The most attractive part, he said, is that photosynthesis is at the very front end of the process of capturing the sun’s energy. “If you lose the energy there, it’s gone, and you don’t have any chance to recoup that loss in later stages. So improving the front end seems to me the most desirable thing to do.”
News Articles
More Articles All Articles
About