News Staff
Though the American government now wants to control intake, another study has affirmed that claims of a link between table salt and hypertension were always on shaky ground.

A new paper in the American Journal of Hypertension instead finds that increased Body Mass Index, age, and non-sodium dietary factors are bigger factors in systolic blood pressure than sodium intake. 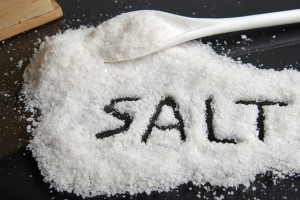 Go pick on gluten for a few decades, nutritionists.
Credit: University of Wisconsin-Extension

Sodium intake, however, was found to be statistically insignificant in relation to blood pressure outcomes. Higher consumption of fruits and vegetables was shown to significantly lower blood pressure, while increased physical activity showed no noticeable effect.

None of the individuals measured received pharmacological treatment for hypertension during the study.

Dr. Jacques Blacher, the study's lead author and both Professor of Therapeutics at Paris-Descartes University and vice-president of the French Society of Arterial Hypertension, said that new research like this should play a prominent role in determining public health initiatives for reducing epidemic hypertension. "Hypertension is the world's most prevalent chronic disease. It affects more than 30% of adults aged 25 and above, and accounts for 9.4 million deaths every year. Given its increasing prevalence and the difficulty we as a global health community have in managing it, more should be done to identify causal behavioral relationships to blood pressure outcomes that can lead to better strategies for preventing hypertension."

"The observational study of Lelong et al. emphasizes the association of systolic blood pressure with BMI." said Dr. Theodore Kotchen, Associate Editor of American Journal of Hypertension. "Additionally, the study addresses the relative importance of BMI with specific components of the diet as possible contributors to hypertension."

The study's authors noted that, though the lifestyle factors measured in the study are often targeted by physicians as areas for adjustment in patients with hypertension, there is surprisingly little data on their individual effects on blood pressure within pharmacologically untreated populations.