The enzyme signal peptide peptidase-like 3 (SPPL3) is known to 'cut' proteins - they cleave the peptide bonds in the polypeptides that make up proteins - but it turns out that it works to activate T-cells, the immune system's foot soldiers - without cutting proteins.

Because its structure is similar to that of presenilin enzymes, which have been implicated in Alzheimer's disease, the researchers believe their findings could shed more light on presenilin functions, in addition to providing new insight into how the immune system is controlled.

"No one could have predicted that SSPL3 was involved in T cell activation," says Joel Pomerantz, Ph.D., an associate professor of biological chemistry at The Johns Hopkins University. "It walks like a duck and quacks like a duck, but its duck-like abilities don't come into play here."

T cells are immune system cells that kill invading cells and help activate other immune cells. When a foreign protein binds to a receptor protein on the outside of a T cell, a signal relay system is activated. It finishes when a protein called NFAT moves to the nucleus and turns on a number of genes to fully prepare the T cell for battle. Some of what happens in between is known, but Pomerantz and his team wanted to find more players in the process. 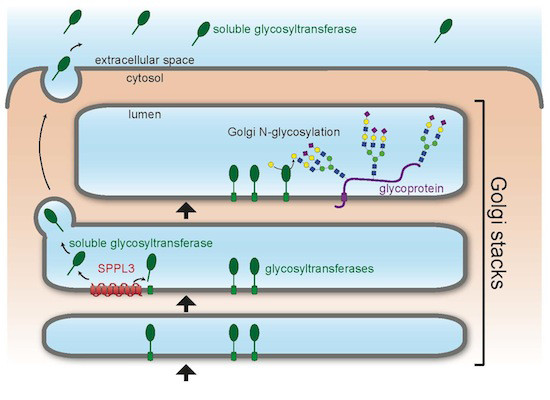 The researchers looked for proteins that could increase NFAT's activity and found SPPL3, an enzyme that proved essential to NFAT's activation but had never before been implicated in immune system function. Further tests properly placed SPPL3 within the sequence of events that lead to NFAT activation.

SPPL3 lives in the membrane of the endoplasmic reticulum (ER), a ruffled, membrane-bound compartment inside the cell that helps process new proteins, where it seems to encourage interactions between STIM1 and Orai1, two known components of the NFAT signal relay system. But SPPL3 turned out to accomplish this without using its enzymatic, or protein-cutting, abilities. It also encourages the release of calcium from the ER, which contributes to the signaling system, though it is unclear whether this is something it does directly or indirectly.

"SPPL3 is a relatively uncharacterized protein that had never before been implicated in immune system function," says Pomerantz. "It opens up a whole new set of scientific questions."

Pomerantz thinks that SPPL3 could be used as a drug target to either enhance the activation of T cells in immunodeficient individuals or to suppress it in those with overactive immune systems. He also plans to study the ability of SPPL3 to mediate the influx of calcium into the cell and the release of calcium from the ER, since calcium is integral to the functioning of many cell signaling networks.

This work was supported by grants from the National Institute of Allergy and Infectious Diseases (PO1AI072677), the Johns Hopkins University Institute for Cell Engineering and from Dr. Richard and Mavis Fowler and The Foundation for Advanced Research in the Medical Sciences, Inc.

Published in Molecular and Cellular Biology.DOI: 10.1128/MCB.01124-14. Other authors of the report include Stefanie Makowski and Zhaoquan Wang of the Johns Hopkins University School of Medicine.