"Keeping up with the Joneses" is a colloquialism for developing world desire to have the same or better status in society than peers. If someone gets a new car, you get a new car.

In some people, status is so important they suffer psychological distress if they lack status.

But it isn't just for the middle class in Western nations, say anthropologists at U.C. Santa Barbara, who found that the same need exists among the Tsimane, an egalitarian society of forager-farmers in the Bolivian Amazon.

Myriad studies have shown that low social status can have negative effects on health, both in humans and in our non-human primate relatives. What is a puzzle about claims of the relationship between status and health is that the improved access to health care, food, housing and other benefits that money and influence can buy do not fully explain it. 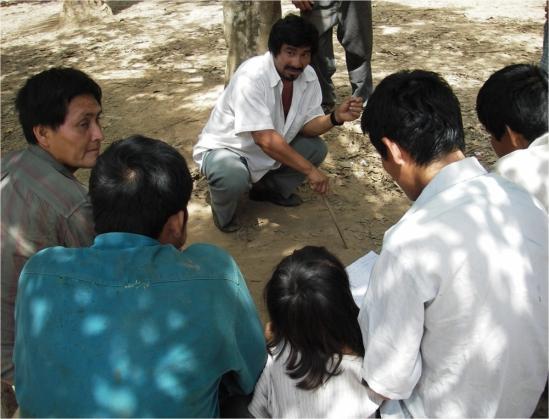 Instead, the growing consensus is that the health risks of low status are due in part to the chronic psychosocial stress of the rat race itself, and of perceived social subordination, whether by other individuals or by institutions.

Status has its obvious rewards in a modern, stratified society — it brings you preferential access to arable land and livestock in a land-limited society with rigid rules of inheritance. But with the Tsimane, none of that is relevant. Everyone has access to farmland, and everyone can freely fish, hunt and gather. Villages do have leaders, but no one holds sway over anyone else. If people don't like the leadership in one village, they simply move to another.

"We're able to show that there are measurable differences in recognized social status even within the egalitarian context, and that these differences matter," said Michael Gurven, professor of anthropology at UCSB and senior author of the paper. "They're all equal, and yet social status is important. It impacts their perceptions, their level of stress and their health."

To examine whether or not lower status is more benign in small-scale, relatively egalitarian societies in which group members frequently share food and other resources, lack coercive authority, and where people have little wealth to contest, the investigators studied the relationship between status and biomarkers of stress and disease among Tsimane men.

While decision-making during village meetings is consensus-based, the opinions and desires of certain men carry more weight. These same men are often solicited to mediate disputes or represent villagers' interests with outsiders. Over months of fieldwork, the researchers, including lead author Christopher von Rueden, an assistant professor of leadership studies at the University of Richmond and formerly a postdoctoral student working with Gurven at UCSB, measured the informal political influence of all men from four villages by having other Tsimane evaluate these men on a number of dimensions.

These same men also provided urinary cortisol samples and received medical examinations from physicians associated with the Tsimane Health and Life History Project, which is co-directed by Gurven and Hillard S. Kaplan of the University of New Mexico.

The researchers found that Tsimane men with less formal political influence have higher levels of the stress hormone cortisol. In industrialized societies, high cortisol levels often indicate chronic psychosocial stress. In addition, less influential Tsimane men are at higher risk for respiratory infection, which is the most common cause of sickness and death in their society. By studying the same individuals over a four-year period, the researchers showed that the greater the decline in influence, the higher the levels of cortisol and the likelihood of respiratory illness.

The researchers also found that influential Tsimane men receive more deference and social support, which can mitigate risks of conflict, sickness and food shortage. "One could argue that social status is more important for the Tsimane than it is for modern Americans," said Gurven. "In our society, you may be unpopular, but if you have enough money, you can buy what you need, including insurance, and people will be willing to help you for a price you can afford. Without the support networks that come with greater social capital and status, you don't have the ability to buffer the kinds of health and economic risks the Tsimane face every day."

According to von Rueden, the research suggests why our minds evolved to attach such significance to our perceived social status. "Small-scale societies like the Tsimane shed light on our evolutionary history, during which we lived in groups much more egalitarian than the hereditary inequality and social stratification of recent human history," he said.

"Furthermore, our political competitors and cooperative partners were individuals with whom we interacted regularly," he continued. "It is telling that even in modern large-scale societies the status comparisons most consequential for psychosocial stress are typically among individuals who are in close geographic proximity or who occupy the same social network rather than between individuals at opposite ends of the socioeconomic spectrum. The importance of relative status perceptions to human psychology has its roots in the small-scale societies of our ancestors."

The impact of social status intersects with another area of inquiry by anthropologists at UCSB that examined the increased risk of depression among older adult members of Tsimane society. "One important determinant of your status is your physical ability to be useful and to produce food and be useful to others," explained Gurven. "If you can produce food, you can share it. With physical aging and a decreasing ability to remain productive at late ages is when we see a big increase in depression."

Findings from that study are published online in the Journal of Gerontology, Psychological Sciences and Social Sciences.

"Food insecurity is the single biggest risk factor for depression," noted Ben Trumble, a postdoctoral researcher in anthropology at UCSB. "While Tsimane culture values older adults, their social status declines at late ages, just as does their ability to produce food and help others."

It is often claimed that the pinnacle of misery occurs during the "midlife crisis," after which people adapt to their circumstances, reshape their outlook on life and become less unhappy at late ages, according to Gurven. "In one of the first systematic studies of depression in a small-scale society, we show that the midlife crisis generalization is not universal — where your physical capabilities are critical for economic productivity, being of sound body and mind is really important," he said. The researchers found that among the Tsimane, depression increases with age in adulthood, but the effect disappears after controlling for differences in physical capabilities and food production.

"It's really that physical ability combined with health and the ability to produce and turn food into social capital are crucial for Tsimane psychological wellbeing," Gurven said.

Being viewed as proficient or expert in activities other than food production — the ritual expert or shaman, for example — may buy someone status even when his economic productivity is waning, but only up to a point, Gurven continued. "As your ability to support yourself and your kin — to feel and be useful to others — decreases, status declines and depression increases," he said.

Noted Jonathan Stieglitz, lead author on the depression paper and a postdoctoral researcher for the University of New Mexico-based Tsimane Health and Life History Project: "While depression is often thought of as a pathology, there may be a motivating aspect to it — to pause and evaluate the circumstances of your life and abilities, in order to shift activities toward those that increase your utility to kin. Depression may be prolonged or worsen if you remain a chronic burden to kin. Under those circumstances, we often see a downward spiral of physical health eventually leading to death."