What's not red and about the size of your thumb?

Tomatoes, before ancient scientists set out to make them patabale.  This genomic history of tomato breeding, based on sequencing of 360 varieties of the tomato plant, has vaulted beyond the first tomato genome sequence completed just two years ago. It will lend insight into science for people who believe genetic modification only began happening during the Clinton administration.

Analysis of the genome sequences of these 360 varieties and wild strains shows which regions of the genome were under selection during domestication and breeding. The study identified two independent sets of genes responsible for making the fruit of modern commercial tomatoes 100 times larger than their wild ancestors. 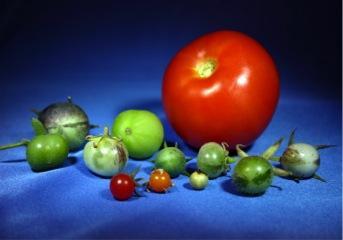 The sequencing of 360 varieties of wild and domestic tomatoes has yielded insights into domestication and pest resistance. Credit: Roger Chetelat, UC Davis

An important finding is that specific regions of the tomato genome were unintentionally depleted in genetic variation: for example, in DNA around genes conferring larger fruit size or genes for resistance to diseases afflicting tomato plants.

These stretches of genetic uniformity illustrate the need to increase overall genetic diversity in modern varieties and highlight the important role that the Rick Tomato Genetics Resource Center and similar collections play in housing much of the genetic variability that will be critical for future breeding and research on tomato.