That is the first time to actually find out the date when lava spewed out of a volcano 5,000 years ago in the inland part of the island as well as the one the whole peninsula.

The research team led by Dr. Jin-Young Lee confirmed in results from radiocarbon dating for carbonized wood (charcoal) found below the basaltic layer located in Sangchang-ri, Seogwipo-si, Jeju-do it dated back to 5,000 years ago; which means the time when the basalt on the upper layer was formed took place relatively recently, i.e. 5,000 years ago, and which demonstrates that the island has experienced a volcanic eruption fairly recently. 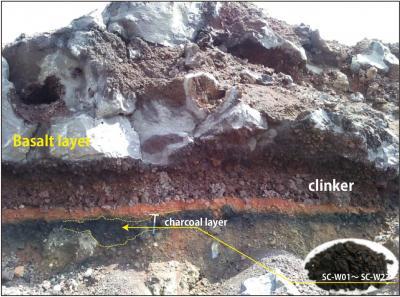 It is also remarkable that the research team enhanced the accuracy of the findings in the radiocarbon dating technique using carbonized wood, consequently raising the reliability of the findings. Until now, previous research used the dating method for rocks covering the upper sedimentary layer, in which such dating method with the relatively longer half-life period shows limitations in determining the time the basalt was formed about 10,000 years ago. These are radiocarbon dating results for charcoal collected from the sedimentary layer in Sangchang-ri, Jeju. Credit: KIGAM

In order to overcome the limitations of the dating method for the rocks covering the upper sedimentary layer, the research team led by Dr. Jin-Young Lee concurrently used radiocarbon dating and optically stimulated luminescence dating (OSL), using such cross-validation of which raised the accuracy of tracing the past volcanic activities.

Judging from the findings, Jeju Island is not an extinct volcano, but seems to rather be a potentially live volcano because a volcano that has erupted within 10,000 years is defined to be a live volcano on a geological basis.

Not remaining complacent for the findings, the research team plans to continuously conduct the studies on the time the volcanic rocks were formed in several regions on the island in order to identify the latest volcanic activity. These are Age Dating Results of the sedimentary layer in Sangchang-ri, Jeju. Credit: KIGAM