News Staff
More than 2,000,000 people are incarcerated in the United States, the highest incarceration rate in the world - little surprise when abusing a dog is a felony, there are different penalties for attacking a person of one color over another, and judges are given no sentencing leeway in many cases.

Given American willingness to put everyone in jail for whatever cultural lobbyists are advocating this year, it was only a matter of time before Sesame Street introduced a character that has an incarcerated father.

What could that possibly have to do with health care inequality? It's evidence of the problem Americans have with framing everything through social justice issues. Writing in Annals of Internal Medicine, Scott A. Allen, MD, a professor of medicine in the School of Medicine at the University of California, Riverside, and colleagues write that a majority of criminals are incarcerated due to behaviors linked to treatable diseases such as mental illness and addiction. Why wouldn't they be in mental health facilities instead? Because cultural activists and journalistic activism got rid of those also, leaving prisons as the largest provider of mental health care, like they were in the 1800s. 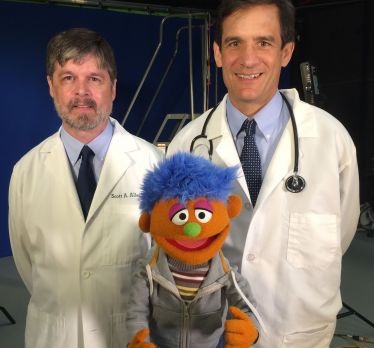 “In such cases, incarceration will improve neither the imprisoned person nor the social problem without medical intervention,” Allen and co-authors Dora M. Dumont, Ph.D., MPH, at the Rhode Island Department of Health and Josiah D. Rich, MD, MPH, at Brown University write. They recommend policy changes that would allow doctors to steer eligible defendants into treatment programs rather than correctional facilities, when appropriate.

To do that, we would have to rebuild all of the mental health hospitals that got closed 20 years ago.

When incarceration is necessary, doctors and correctional facilities should coordinate transfer of patient care upon release so that gains made during incarceration are not lost, they write.

The authors also note that incarceration reduces prisoners’ access to social resources such as health programs. Incarcerated persons have a higher chance of being unmarried and unemployed. They tend to lack access to non-emergency health care as well as health insurance. Frequently, they are excluded from anti-poverty programs. Many are even banned from receiving food stamps and are deemed ineligible to receive federal student financial aid.

“Physicians should join ongoing efforts to end policies banning former prisoners from the antipoverty programs designed to promote citizenship, productive participation in society, and along the way, health,” they write.

“Incarceration affects also the well-being of the incarcerated’s family members,” Allen said. “This is especially true of children, whose health could be adversely affected by unhealthy stress-coping behaviors that the incarcerated persons’ partners often choose – smoking and drinking, for example.”

More than half of federal and state prisoners are parents of nearly 1.5 million minor children, and one-fifth of prisoners have children under the age of five. Children of incarcerated parents are more likely to have witnessed criminal activity and/or the arrest of the parent, both of which have been shown by researchers to have unique effects undermining children’s socio-emotional and behavioral adjustment.

The authors urge all physicians to be more aware of social issues such as education, housing, race and poverty – social determinants of health that can increase incarceration risk.

“These factors have been demonstrated to have effect on health,” Allen said. “There are the obvious things that affect health like genetics, nutrition and access to preventive and disease oriented healthcare, but social determinants of health have also been shown to have a significant impact on health. Numerous investigators have demonstrated that factors like poverty, lack of access to good education, poor or no housing, and being in certain racial groups are associated with poor health and poor outcomes.