Arroyos are deep, oversized channels that have vertical or steeply cut walls made up of silt, clay, or sand. Because of this makeup, arroyo systems are inherently unstable, shifting at the century to millennial scale between broad floodplains and incised, high-walled channels, in which floods have a high stream power that causes more rapid erosion.

By determining burial dates in tree rings from salt cedar and willow, investigators were able to precisely date arroyo sedimentary beds 30 centimeters thick or greater. They then combined this data with aerial imagery, LiDAR, longitudinal profiles, and repeat surveys to reconstruct the history of these arroyos. 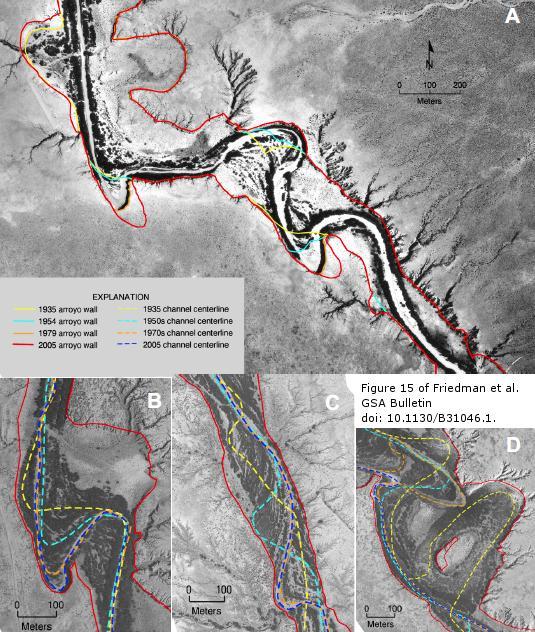 This is Figure 15 from Friedman et al. Channel migration and erosion of the arroyo wall along the Rio Puerco, New Mexico. In all cases, channel flow is from top to bottom and north is toward the top. Credit: Jonathan M. Friedman et al. Image acquired 2005.

Study authors Jonathan Friedman of the U.S. Geological Survey and colleagues note that although the channels of the Rio Puerco and Chaco Wash are narrow, like an erosional gully, and uniform, like a human-made ditch, they are, in fact, natural depositional features.

Along both rivers, erosion occurred until the 1930s in association with extremely high flows. Subsequent infilling was caused by vegetation growth, channel narrowing, increased sinuosity, and vertical accumulation of sediments.

Friedman and colleagues write that strongly depositional sediment transport interacted with floodplain shrubs to produce a characteristic narrow, trapezoidal channel. However, the 55-km study area along the Rio Puerco demonstrated upstream progression of arroyo widening and filling, but not of arroyo incision, channel narrowing, or floodplain vegetation development.

Friedman and colleagues conclude that the occurrence of upstream progression within large basins like the Rio Puerco makes precise synchrony across basins impossible. Arroyo wall retreat is now mostly limited to locations where meanders impinge on the arroyo wall, forming hairpin bends, for which entry to and exit from the wall are stationary.

The team notes that with the Rio Puerco's current rate of sediment deposition and long-term bedrock erosion, it would take the arroyo 310 years to completely fill in.