Phthalates are chemicals that increase the softness and flexibility of plastic.  Due to concerns about potential health problems, the US government has permanently banned three types of phthalates (DEHP, DBP, BBP)1 in any amount greater than 0.1 percent for each phthalate in children's toys and for some child care items used for toddlers ages 3 and under.

Manufacturers have been turning to alternative plasticizers, which are different phthalates, but outside the ordinary approval process little is known about the toxicity of the replacements or whether they can enter the air infants breathe for 12 to 14 hours per day at potentially harmful levels.

Since infants breathe in far more air given their low body weights than adults, Ying Xu and Yirui Liang
wondered if they might be getting exposed to high levels of alternative phthalates. A new paper examines one possible exposure route for babies - vinyl crib mattress covers that emit more phthalates into the air as they are heated. 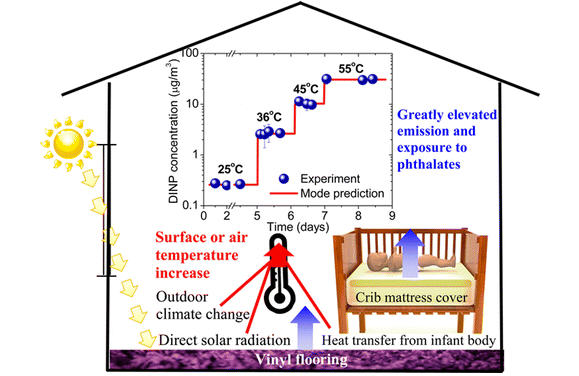 Emissions of phthalates and phthalate alternatives from vinyl flooring and crib mattress covers were measured in a specially designed chamber. DOI: 10.1021/es504801x

The researchers tested the amounts of the alternative-phthalate plasticizers released from vinyl crib mattress covers at different temperatures and estimated how much of that the infants might breathe in.

They found that, under hot conditions, the covers emitted significantly higher levels of phthalates that could cause a baby's exposure to increase four-fold.  The gas-phase concentrations versus time were measured at four different temperatures, 77 degrees,97 degrees, 113 degrees and 131 degrees Fahrenheit. The measured ratios of
material-phase concentration (C0)
to  gas-phase concentration in equilibrium with the material phase
(y0) were exponentially proportional to the reciprocal of temperature, in agreement with the van’t Hoff equation. A emission model was validated at different temperatures, with excellent agreement between model calculations and chamber observations.

In residential homes, an increase in the temperature from 77 to 97 degrees can elevate the gas-phase concentration of phthalates by more than a factor of 10, but the total airborne concentration may not increase that much for less volatile compounds.

They say the preliminary study is an essential first step to investigating the potential risk posed by these new phthalates.