News Staff
Kepler-413b is located 2,300 light-years (about 700 parsecs) away in the constellation Cygnus. It circles a close pair of orange and red dwarf stars every 66 days but what really makes Kepler-413b unusual is that it precesses wildly on its spin axis - The tilt of the spin axis of the planet can vary by as much as 30 degrees over 11 years with respect to the plane of the binary star's orbit.

Compare that to the Earth's rotational precession, which is a far more modest 23.5 degrees over 26,000 years. This far-off planet is far-out and all of this complex movement leads to rapid and erratic changes in seasons.  That it is precessing on a human timescale is simply amazing.

It orbits slightly closer to the stars than the inner edge of the system's habitable zone, a region where temperatures allow for liquid water to exist. Since it's also a giant gas planet of about 65 Earth masses, a super-Neptune, don't get too excited about visiting. With all of that wobbling you wouldn't know what to wear anyway - the weather changes more often than Kentucky. 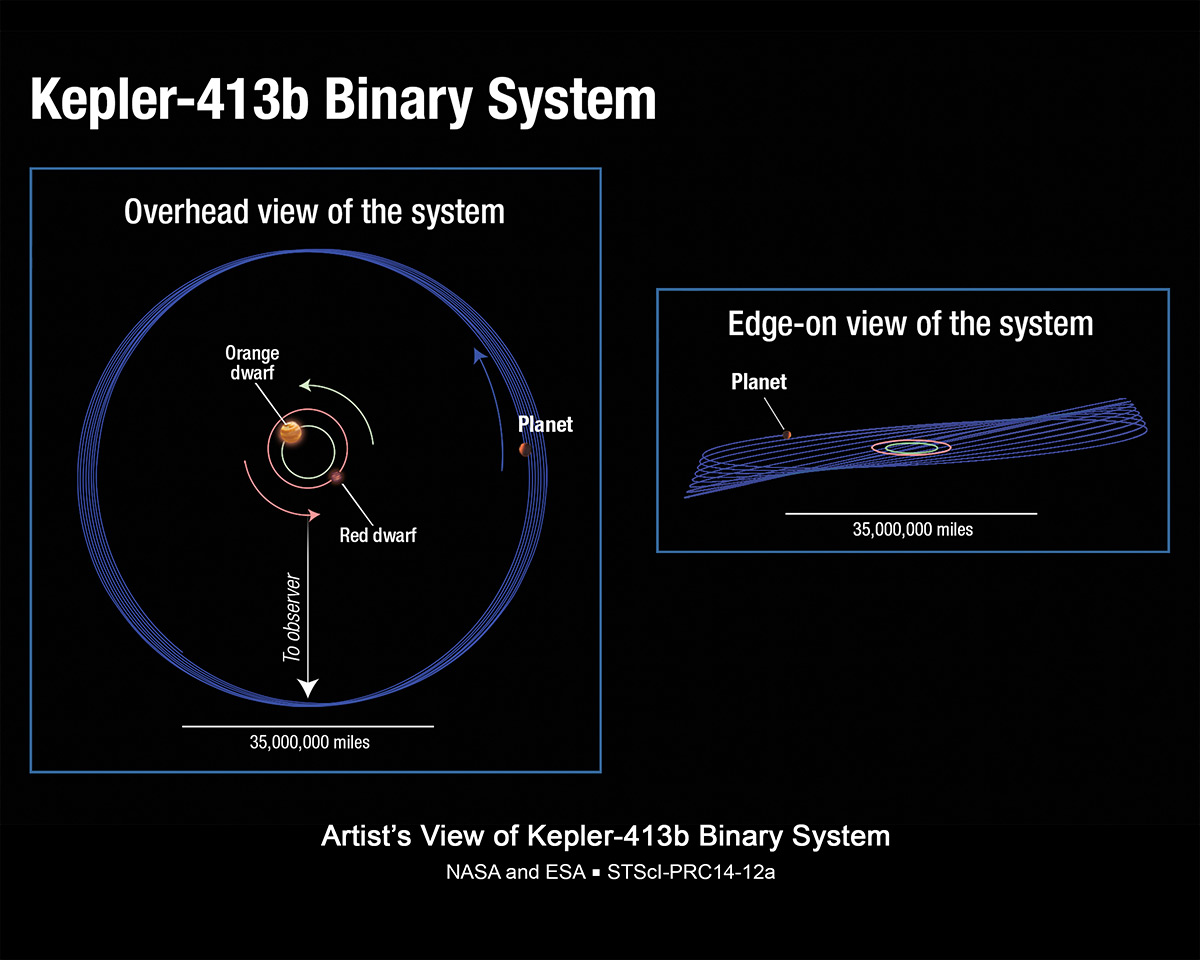 Astronomers using Kepler discovered this characteristic when they found an unusual pattern of transits for Kepler-413b. Normally, transiting planets are seen passing in front of their parent stars like clockwork. Kepler finds such planets by noticing the dimming of the parent star — or in this case, stars — as the planet travels in front of one of them.

"What we see in the Kepler data over 1,500 days is three transits in the first 180 days (one transit every 66 days), then we had 800 days with no transits at all," explained Veselin Kostov, the principal investigator on the observation. Kostov is affiliated with the Space Telescope Science Institute (STScI) and the Johns Hopkins University (JHU) in Baltimore, Md. "After that, we saw five more transits in a row."

The next transit is not predicted to occur until 2020. This is due not only to the orbital wobble, but also to the small diameters of the stars and the fact that the orbital plane of the stars is not exactly edge-on to our line of sight. It just so happened that the astronomers caught the planet while it was transiting.

Because of the orbital wobble, the orbit continuously moves up or down relative to our view. This change is large enough that sometimes it misses passing in front of the stars, as seen from Earth.

To understand the complicated motions of this planet, imagine a bicycle wheel lying on its side. Spin the wheel while it is lying on the ground, and it will wobble. This is like the orbit of the planet. Now imagine putting a spinning top on the rim of the horizontal, spinning wheel. This is like the wobbling motion of the planet's rotational precession.

Astronomers are still trying to explain why this planet is out of alignment with its stars. There could be other planetary bodies in the system that tilted the orbit. Or, it could be that a third star nearby that is a visual companion may actually be gravitationally bound to the system and exerting an influence.