What Happens To A Bridge When One Side Uses Mediterranean Sea Level And Another The North Sea?
By News Staff | October 2nd 2013 08:27 AM | Print | E-mail

Where is 'sea level' and how far above sea level is a particular place located?

Quite a lot of things may go wrong in bridge building and the inhabitants of the German and the Swiss parts of Laufenburg were looking forward to a new bridge over the Rhine, the High Rhine Bridge, when they were taken aback by an embarrassing error: The heights of the two bridge parts growing towards each other differed by 54 centimeters.

Someone in the height networks of Switzerland and Germany included the known height difference of 27 centimeters incorrectly into the calculation so that they were doubled instead of deleted. This height difference existed at all because the Germans refer to the sea level of the North Sea whereas the Swiss refer to the sea level of the Mediterranean Sea. "Sea level" is not the same everywhere.

To rule such errors out in future, geodesists would like to re-compute sea level on the basis of the gravitational force of the Earth and they want to have 1 cm accuracy - but that stretches the limits of conventional measurement procedures or GPS technologies via satellites.

Optical atomic clocks offer a new approach, because the tick rate of a clock is influenced by gravity. This well-known tiny effect was measured with unprecedented precision in 2010 using two optical clocks – located at the same institute. Now, up to 2000 km may lie between them; using commercial optical fibers and a sophisticated amplifier technique, the frequency of one of the atomic clocks can be transported to the other where the frequencies may then be compared.

Highly sensitive interferometry method allows the long-distance transfer and comparison to be performed with an accuracy of 19 digits. Optical atomic clocks offer the perspective of realizing a frequency with such accuracy that even the small frequency deviations, which are caused by a height difference of a few centimeters, eventually become evident. What lies behind this is Einstein's general theory of relativity, the so-called gravitational red shift: If a clock is further way from the Earth, time actually runs a little faster for it. For a height difference of one meter, the rate (i.e. the frequency) of a clock changes by 1 × 10.

A lot of things have already been investigated in this field: Atomic clocks have, for example, been transported halfway around the world in aircraft – and afterwards it was actually found that their time had passed slightly differently to that of an atomic clock on Earth. And three years ago, Chou et al. (Science 2010) installed two optical aluminium clocks in neighboring laboratories with a height difference of 33 cm – and they were able, in fact, to measure the influence this small height difference has on the frequencies of the two clocks.

"But how can I measure the height difference, i.e. this frequency difference, if the two clocks are not standing side by side? That is to say: How can I establish the connection to a second clock which is standing where a height must be measured with such accuracy?" asks Gesine Grosche, physicist at the Physikalisch-Technische Bundesanstalt (PTB). To find an answer to this question, she and colleagues from the Max Planck Institute of Quantum Optics (MPQ) in Garching have investigated in the past few years how such "precision frequencies", as they can be generated by an optical atomic clock, can be sent on a journey. After they reported last year in Science that they had succeeded in realizing a frequency comparison over the section of 920 km between the MPQ and PTB, they have now doubled this section – and generated even better stabilities.

"We can obtain the required correct values very quickly without having to perform long measurements," explains Stefan Droste from the MPQ. "The total measurement uncertainty lies at only 4 × 10, allowing a height difference of 4 mm between clocks to be resolved within 100 seconds of measurement time only."

Such values make the new technology highly interesting for practical applications. "In principle, optical clocks in research institutes which are further away can now be quasi 'interconnected' and used for all purposes, for which such 'good' frequencies are required," explains Ronald Holzwarth from the MPQ. 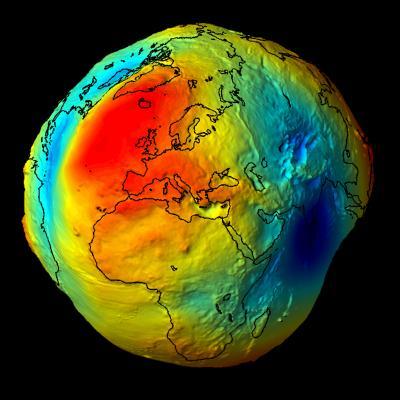 It's not a deflated soccer ball, this is the Earth when it is represented as a geoid, i.e. when the actual distribution of the gravitational force is shown. Here, the height of the "bumps", which are related to the gravitational field of the Earth, has been determined by the Goce satellite. Although the data are precise as far as the respective height of the "humps" is concerned, the lateral resolution amounts to a few kilometers. In future, frequency comparisons between optical atomic clocks can be used if one wants to know the height of the smaller structures and places on Earth. Now it will be possible to transport the frequency over a distance of approx. 2000 km with a resolution which corresponds to a height difference of only 4 mm if the remote clocks support such accuracy. Fig.: ESA

Researchers from the MPQ and PTB as well as French researchers have used this possibility to carry out spectroscopic investigations on hydrogen, which are important for the fundamental question of whether quantum mechanics really gives a good description of the world.

And now the geodesists are virtually just around the corner. "Together with the universities of Hanover and Bremen, we are preparing the application for a special research area," says Gesine Grosche. In addition, this research could also be used for radio-astronomic investigations. For that purpose, our colleagues in Australia do not want to compare frequencies over 2000 km, but over approximately 4000 km which is, of course, making things even more complicated. But Gesine Grosche is optimistic: "Now that we have laid the foundations for this, we will probably also achieve it!"

And, naturally, also the good cooperation over many years between PTB and the MPQ in this field will continue. Perhaps some day the height between Braunschweig and Garching will be measured over the large distance – of course also via the glass fiber link and with the aid of a clock comparison.