Even while the Roman empire was in decline, precious substances, such as frankincense, were being transported to its furthest northern outpost in Britain.

Archaeologists writing in the Journal of Archaeological Science used molecular analysis of materials previously thought to be of little interest, debris inside burial containers and residues on skeletal remains and plaster body casings, to show that frankincense were being used even in the farthest corners of the Empire. Evidence for the use of resins in ancient funerary rites is uncommon outside of Egypt.

The samples came from burial sites across Britain, in Dorset, Wiltshire, London and York, dating from the third to the fourth century AD. Of the forty-nine burials analyzed, four showed traces of frankincense - originating from southern Arabia or eastern Africa - and ten others contained evidence of resins imported from the Mediterranean region and northern Europe. 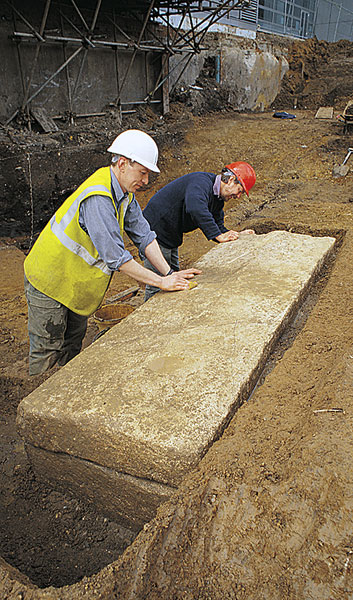 Spitalfields sarcophagus courtesy of the Museum of London.

Classical texts mention these aromatic, antimicrobial substances as being used as a practical measure to mask the smell of decay or slow decomposition during the often lengthy funeral rites of the Roman elite. But it was their ritual importance which justified their transportation from one end of the empire to the other. Seen both as gifts from the gods and to the gods, these resins were thought to purify the dead and help them negotiate the final rite of passage to the afterlife.

Rhea Brettell from the University of Bradford, whose research is funded by the Arts and Humanities Research Council, was the first to realize that these grave deposits were an untapped reservoir of information which could provide the missing evidence:

"Archaeologists have relied on finding visible resin fragments to substantiate the descriptions of burial rites in classical texts, but these rarely survive," she says. "Our alternative approach of analyzing grave deposits to find the molecular signatures of the resins - which fortunately are very distinctive - has enabled us to carry out the first systematic study across a whole province."

These resins were only recovered from burials of higher status individuals, identified from the type of container used, the clothing they were wearing and items buried with them. This is consistent with the known value of frankincense in antiquity and the fact it had to be brought to Britain via what, at the time, was a vast and complex trade route.

University of Bradford Professor of Archaeological Sciences, Carl Heron, who led the research, addsed, "It is remarkable that the first evidence for the use of frankincense in Britain should come from such seemingly unpromising samples yet our analysis demonstrates that traces of these exotic resins can survive for over 1700 years in what others would reject as dirt."

The project was a collaboration between the University of Bradford and specialists at the Anglo-Saxon Laboratory in York, the Museum of London and the Universities of Bamburg and Bordeaux.

Dr Rebecca Redfern, research osteologist in the Centre for Human Bioarchaeology at the Museum of London, said: "This eye opening study has provided us with new and amazing insights into the funerary rituals of late Roman Britain. The University of Bradford's significant research has also rewarded us with further understanding of a rich young Roman lady, used in the study, whose 4th century skeleton and sarcophagus was discovered near Spitalfields Market in the City of London in 1999, making her burial even more unique in Britain."