News Staff
In the Cueva de la Dehesilla of Cádiz on the Iberian Peninsula, two human skulls and a juvenile goat were discovered in a funerary structure dating to the Middle Neolithic period, 4800-4000 B.C.

The archaeological structures and materials from a funerary ritual tell a tale of human and animal sacrifice, ancestral cults and propitiatory rituals, or they could be divine prayers in commemorative festivities.

The two adult human skulls are an older male and a younger female. The female skull shows a depression in the frontal bone, which probably comes from an incomplete trepanation, as well as cuts in the occipital bone produced by decapitation. 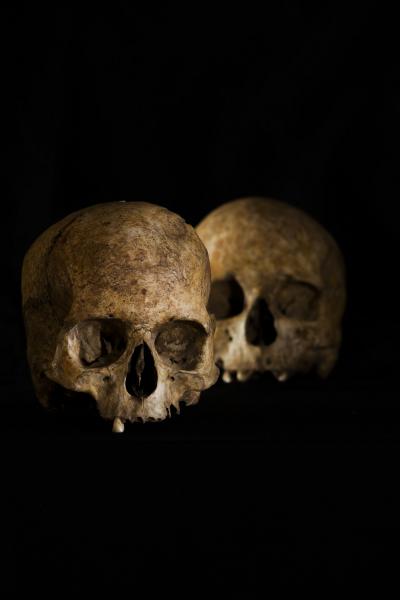 A wall was found separating the human skulls and the skeleton of the goat from a stone altar with a stele and a hearth. Several uniquely decorated ceramic vessels, some lithic objects and charred plant remains were also discovered.

The funerary rituals of the 5th millennium B.C. are the least well known period of the Neolithic populations of the Iberian Peninsula. What few funerary records existed are of individual burials, with secondary burials being unusual. Such burials are in areas of habitat, and are mostly associated with remains of ceramics and shells, as well as homes.

So fire was known to be important that long ago but not stone structures like those now documented in the mountains of Cádiz. This adds to the cultural mosaic of the funerary and ritual traditions of these peasant and herding populations, with a probable division between the Andalusian region and the eastern seaboard of the peninsula, the two regions where most data is available today.
News Articles
More Articles All Articles
About