Why does beer transform from a liquid to a foamy state after an impact? Science is on the wave propagation case.

As you know, if you shake a carbonated beverage, it will foam over when you open it. But one messy and slightly dangerous bar trick involves hitting a bottle on the opening and watching the base explode. It can happen unintentionally also. Home brewers of beer call this a bottle bomb.

Like most good science, the idea started in a bar. It was observed that the foam of a beer spilled over when somebody jokingly hit the neck of one bottle against the base of another. "We all began to propose hypotheses and theories about the cause of the phenomenon, but none of them convinced us, so we decided to take it to the laboratory to do research using controlled experiments in well-defined conditions to analyze which physical phenomena are behind the appearance of that foam," comments lead author Javier Rodríguez, a professor in  Universidad Carlos III de Madrid's Department of Thermal and Fluids Engineering.

The answer: It is a process with three well-defined phases. First, expansion and compression waves appear. These advance inside the liquid and cause the gas cavities (bubbles) to burst at the bottom of the bottle. Afterwards, small balls of foam are formed because the bubbles break into even smaller ones. Finally, given that they weigh less than the liquid surrounding them, these bubbles move to the surface so rapidly that the final result is similar to an explosion.

"In fact," comments Rodríguez, "those clouds of foam are very much like the mushroom cloud caused by a nuclear explosion." In one second, almost all of the beer shoots out of the bottle.

The foam appears because, in carbonated beverages, there is more carbon dioxide (CO2) than the water (the main component) is able to maintain in the solution. Usually, the CO 2 escapes very slowly, but the chain of events set off by the blow to the bottle multiplies the escape of gas by a very high factor: a bottle may lose in seconds the same amount of gas that it would normally lose in hours if we simply left the bottle open on the table."

Of course, this research can help with more than beer, it can also help with naval engineering, seismic study of oil fields or in studies related to the prediction of gases in volcanic eruptions.

And if you have a big enough beer bottle, you could take out a whole mountain. That's bad. 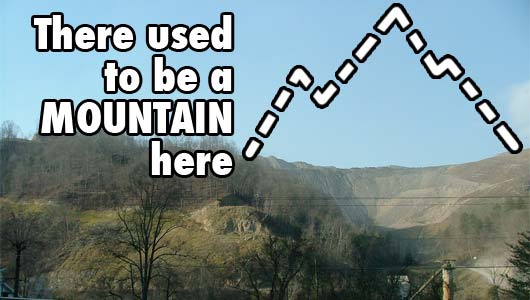 A giant kegger did not cause this mountain to disappear. But it could have. Credit and link: Things Worse Than Nuclear Power

In order to demonstrate the validity of their theory, the researchers came up with a system for studying the phenomenon in slow motion. First, they aimed at the base of the bottle with a high energy pulsed laser to cause a bubble to appear. Then they hit the neck of the bottle and recorded everything with a high-speed camera that allowed them to obtain over 50000 still photos per second. Because of this, they were able to describe in detail the process that is behind this chain reaction: cavitation. This is a hydrodynamic affect that is similar to boiling (as far as the formation of bubbles is concerned), but which occurs when the pressure in a liquid drops.

Far from being just an interesting trick, this research may have very serious applications. "One of applications is the prediction of the quantity of gasses produced by the eruption of a volcano," indicates co-author Daniel Fuster of the Institute D'Alembert. In 1986, Lake Nyos in Cameroon, which lies on top of a volcano, released between 100,000 and 300,000 tons of CO 2 in an explosion-like phenomenon.

The gas expanded at a speed of 100 km/h, expelling the oxygen in a 25-kilometer radius, causing 1,700 fatalities among the population and killing thousands of animals due to asphyxiation.

Understanding the phenomenon of cavitation may lead to the improvement in the design of boat propellers (which are highly exposed to erosion caused by bubbles), to the optimization of the protection of structures from explosions or certain shock waves, or it may favor chemical reactions through bubble implosion, point out the researchers.

"This is one of the great advantages of basic research," concludes Rodríguez. "You learn low-cost physics in the laboratory, with systems that are as simple as a bottle of beer, and this can later help you to understand and attempt to solve other important problems."