The discovery of graphene a decade ago was the first proof of a free-standing two-dimensional (2D) solid phase and new quantum molecular dynamics simulations of nanoscale gold patches suspended in graphene pores predict we may get the same thing in a liquid: an atomically thin, free-standing 2-D liquid phase.

That pushes the boundaries of possible phases of materials but 2-D materials were considered impossible until the discovery of graphene and the exceptional planar stability of gold due to relativistic effects may mean hope for a 2-D liquid phase.

Why only 2-D solids so far?

The thermal atomic motion required for molten materials easily breaks the thin and fragile membrane so existence of an atomically thin flat liquid is considered impossible but researchers from the Nanoscience Center at the University of Jyväskylä have conducted simulations that predict a liquid phase in atomically thin golden islands that patch small pores of graphene.

According to their models, gold atoms flow and change places in the plane, while the surrounding graphene template retains the planarity of liquid membrane.

"Here the role of graphene is similar to circular rings through which children blow soap bubbles. The liquid state is possible when the edge of graphene pore stretches the metallic membrane and keeps it steady," says Academy Research Fellow Pekka Koskinen. 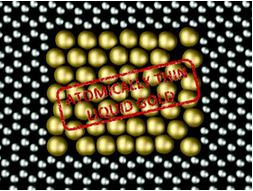 The liquid phase was predicted by computer simulations using quantum-mechanical models and nanostructures with tens or hundreds of gold atoms. The liquid state exists only in computers and just about anything is possible using math and models. But like with 2-D solids it may be that 2-D liquid is waiting for experimental confirmation rather than being impossible.

"Unfortunately, simulations suggest that the flat liquid is volatile. In experiments the liquid membrane might burst too early, like a soap bubble that bursts before one gets a proper look at it. But again, even graphene was previously considered too unstable to exist," Koskinen says.