News Staff
Certain bats may be approaching wind turbines after mistaking them for trees, according to a study, and that could be leading to disaster.

Propped up by government mandates and subsidies, both solar and wind energy have become more common and thus both have come under criticism. Solar panels are toxic for the environment and their efficiency drops quickly in real-world conditions while wind has been implicated in sleep issues in humans and environmental peril.

A new study led by U.S. Geological Survey scientist Paul Cryan used video surveillance cameras to watch bats for several months flying at night near experimentally manipulated wind turbines and led to the discovery that tree-roosting bats, or “tree bats,” may approach and interact with wind turbines in consistent and predictable ways. 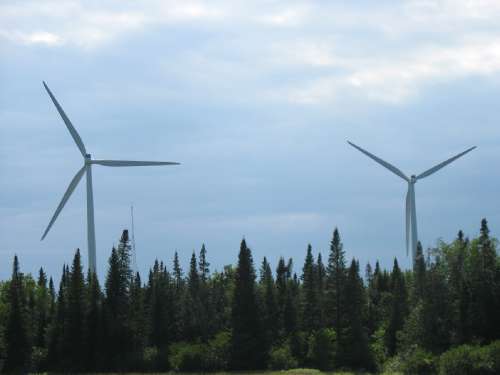 Bats are long-lived, slow-breeding mammals that serve as the main predators of night flying insects, such as moths and beetles. Insect-eating bats are estimated to save farmers billions of dollars each year in the United States by providing natural pest control. Historically, fatal collisions of bats and tall, human-made structures were rarely observed, but something changed with the construction of large, industrial wind turbines. It is now estimated that tens to hundreds of thousands of bats die each year after interacting with the moving blades of wind turbines. Most tree bats are found dead beneath turbines in late summer and autumn, yet reasons for this seasonal susceptibility remain a mystery – unknown behaviors of bats may play a role.

"If we can understand why bats approach wind turbines, we may be able to turn them away," said Paul Cryan, a USGS research scientist and the study’s lead author. "Advances in technology helped us overcome the difficulties of watching small bats flying in the dark around the 40-story heights of wind turbines. The new behaviors we saw are useful clues in the quest to know how bats perceive wind turbines and why they approach them."

The researchers used ‘thermal’ cameras that image heat instead of light, and they recorded surveillance imagery of bats for several months at three wind turbines in Indiana. The team also monitored the nighttime airspace around turbines with near-infrared security cameras, radar and machines that record the ultrasonic calls of bats, as well as developed computer code for automatically finding bats in the hundreds of hours of recorded video imagery. Over the period of the study, bats were seen on video near turbines more than 900 times.

Bats typically approached turbines one or more times rather than just flying past, and bats often flew very close to the turbine monopoles, nacelles (machinery boxes at top of monopoles) and sometimes approached stationary or slow-moving blades. At the same time, radar indicated that hundreds of night-migrating birds were flying above and around the turbines nightly, but not closely approaching like bats.

The most surprising discovery was that bats more often approached wind turbines high above the ground and from the downwind side when the wind was blowing. This strong pattern strengthened as wind speed increased and when turbine blades were experimentally prevented from turning at full speed, but decreased in high winds when turbine blades spun normally. Bats also appeared at turbines more often during brightly moonlit nights. The authors concluded from these patterns that bats might follow airflow paths around tree-like structures and use visual cues at night, but may not be able to tell a tree from a wind turbine with slow or stopped blades.

"The way bats approach turbines suggests they follow air currents and use their dim-adapted vision to find and closely investigate tall things shaped like trees," said Marcos Gorresen, an author of the study and scientist with the University of Hawaii at Hilo. "We see these behaviors less often on darker nights and when fast-moving turbine blades are creating chaotic downwind turbulence. This may be because bats are less likely to mistake turbines for trees and approach them in those conditions."

Previous studies indicated that bat fatalities at wind turbines might occur more often on nights with low average wind speeds. The authors speculate that bats may be more likely to approach turbines in such conditions when turbines have airflow patterns resembling trees, but then might be put at risk if wind speed rapidly increases and pushes turbine blades to speeds faster than bats can perceive or outmaneuver.

Although these new findings revealed bats closely investigating most parts of the turbines, the study could not determine their reasons for doing so. The authors wonder if bats might expect to find roosts, clouds of insect prey or other bats at turbines as they might at trees, regardless of whether such resources actually occur at wind turbines. Little is known about the behaviors of bats or insects around tall trees during late summer and autumn, but the authors write that studying treetop behaviors in natural environments might help explain why bats are particularly susceptible to wind turbines.

The new findings also have practical implications toward the goal of reducing or avoiding bat fatalities at wind turbines. A current method of reducing bat fatalities at wind turbines is to increase the wind speed threshold at which turbine blades begin operating and spinning fast. “It might be possible to efficiently further reduce fatalities with this method by accounting for sporadic gusts of wind during low-wind periods when bats might be hanging around turbines,” said Cris Hein, an author of the study and scientist with Bat Conservation International. The findings also suggest that pointing monitoring or deterrent devices into the downwind airspace of a turbine might have better chances of detecting or keeping bats away than if they are pointed elsewhere.

The authors conclude that increasing our understanding of the ways that bats perceive and approach wind turbines helps in the search for solutions to reduce the effects of this important energy source on bat populations.