The RoboSwift micro-aircraft has made its first flight. The small, quiet plane is equipped with observation cameras that can be used in the future to study birds or to conduct surveillance of groups of people or vehicles.

The RoboSwift is characterised by the continuously variable shape of its wings, known as ‘morphing' wings, which are modelled on the wings of the swift bird. These wings make the aircraft, like its living model, very maneuverable and efficient. As a result, the RoboSwift is the first aircraft in the world to have the wing properties of living birds. Wind tunnel tests have shown that it can come remarkably close to the exceptional flying ability of the swift.

The silhouette of the RoboSwift is similar to that of an actual swift, which makes it less noticeable than other observation aircraft and helicopters. The ‘pilot’ is now being trained in birdlike flying behavior, which will later include gliding flights. 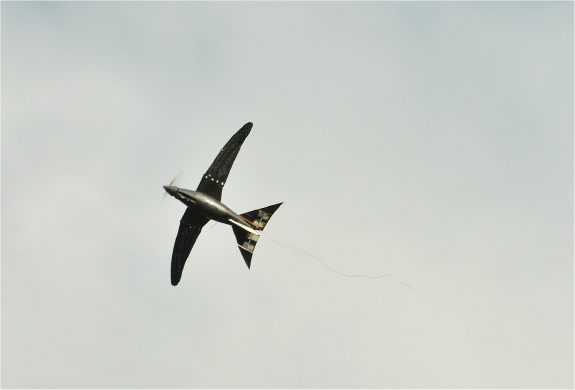 With a wingspan of approximately 50 cm and a weight of less than 100 g, the RoboSwift is a good deal smaller than standard model aeroplanes. To gain elevation, it is equipped with a very quiet electric motor with a propeller.

During gliding flights, the motor is turned off and the propeller folds up so the aircraft can fly even more quietly and save energy.

If equipped with micro-cameras that can observe in various directions, interesting applications for the RoboSwift are conceivable. For example, in the future the researchers hope to be able to observe wild birds from nearby without disturbing them by using birdlike aircraft such as the RoboSwift. This would allow new forms of biological research to be conducted. It would also make it possible to perform inconspicuous surveillance of groups of people or vehicles (crowd control).

In recent months, aerospace engineering students at Delft University of Technology have developed the aircraft in cooperation with the Experimental Zoology Group of Wageningen University, Netherlands.

The students based the project on the findings of their supervisor, David Lentink of Wageningen University. In April 2007, with several co-authors he published a study in the journal Nature about the aerodynamic properties of the swift.

During its lifetime, a swift flies a distance comparable to five roundtrips to the Moon and can remain in the air continuously for 7000 kilometres. Lentink and his associates discovered that the swift can fly so efficiently and maneuver so well because it continuously adapts the shape of its wings to the flying conditions.

Studies such as his were the inspiration to develop aircraft based on bird's wings, which is known as ‘bio-inspired’ design.

The Dutch National Police Services Agency (KLPD) is continually looking for innovations that are applicable to police work and sees possibilities in the Roboswift. It is therefore supporting the project financially. For example, the RoboSwift could help the police in case of accidents, demonstrations and in enforcement and surveillance.

Between 10 and 15 March, the group of students who developed the RoboSwift will be competing in an international contest in India for micro-aircraft: the American-Asian Micro Air Vehicle (MAV) Competition.