After half a century of debate, a University of Alberta researcher has confirmed that dome-headed dinosaurs called pachycephalosaurs could collide with each other during courtship combat. Eric Snively, an Alberta Ingenuity fellow at the U of A, used computer software to smash the sheep-sized dinosaurs together in a virtual collision and results showed that their bony domes could emerge unscathed.

The computer simulations by Snively and his co-author Andrew Cox of Villanova University offer clues as to how the dinosaurs (between 80 and 65 million years old and native to Canada, the United States and Mongolia), might have survived head-to-head combat like modern marine iguanas and musk oxen. 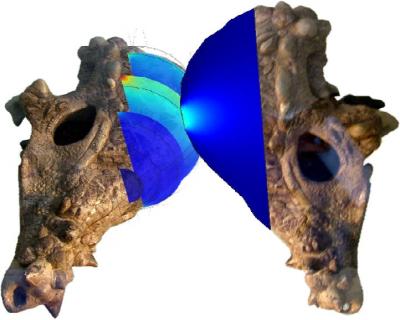 Some researchers have suggested that pachycephalosaur domes, which ranged from one to 20 centimetres thick, enabled head-butting contests as a way to attract mates, similar to the contests bighorn sheep engage in today. “Pachycephalosaur domes are unique and we can’t yet tell for certain if they butted heads, but we can test their capabilities for the behaviour with math and physics,” says Snively. He and Cox did just that by constructing three-dimensional computer models and then putting them to the test in virtual smash-ups.

In a study published in the journal Palaeontologica Electronica this month, the authors used a method called finite element analysis to simulate collisions in three kinds of pachycephalosaurs. Dome shapes immediately dropped stresses below those that would break even spindly struts of bone in some domes, and the collisions were mild enough to avoid concussions. “It turns out that nearly-adult pachycephalosaurs would be best at handling collisions,” Snively said. “Other researchers have shown that big adults and young juveniles would be worse off, because they couldn’t heal as well. We think young adults could go at it, and older adults might intimidate youngsters with their giant domes.”

The key to safe collisions wasn’t just in the domes, but behind them in the body. Special sliding joints in vertebrae of pachycephalosaurs, including Stegoceras at the University of Alberta, show their backbones could buckle from collisions and then spring back into position. “It’s a little like in giraffes, who have sideways springiness in their neck ligaments and smash the heck out of each other with their heads,” Snively noted.