Halloween is a holiday with lots of creepy wildlife associated with it, but are they really so creepy? From toads to bats to owls, the National Wildlife Federation shares the facts about these animals and what they are up to at this time of year, which might dispel a few myths.

Bats - are they out for my blood?

Blood sucking vampire bats are real – but they mostly feed on chickens and cows and only live in Latin America. Most North American bats are insect eaters, feeding on everything from moths to mosquitoes to beetles. They use echolocation to find their prey, which is kind of like radar, rather than eyesight. They tend to have beady little eyes and weird-shaped faces which makes them look scary. But those faces help capture sound waves bouncing off of prey and other objects and funnel those waves to their ears.

Many bat species are entering into hibernation in caves or hollow trees at Halloween, but some fly south for the winter, just like birds.

Spiders - should I venture into those Caves under Mount Doom or not?

Spiders, with their eight legs and multiple eyes, are creatures right out of nightmares—and their sticky webs and venomous fangs don’t help their public image either. But even though they might look scary, spiders are actually extremely beneficial predators of all sorts of insect pests. And only three species in the U.S. that have venom considered strong enough to hurt people: the black widow, the brown recluse and the hobo, and spider bites from these are very rare.

By Halloween, female spiders are guarding egg sacks which hold the next generation of spiders. 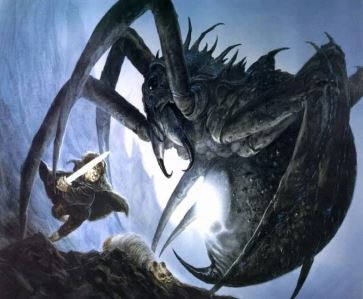 Toads - will they give me warts?

Toads are not just a key ingredient in witches’ brew, they are important environmental indicators. All amphibians are susceptible to environmental toxins because of their sensitive skin. They are usually the first species to die out in polluted areas. If you have healthy toad populations in your area, it’s a good sign that your neighborhood is fairly unpolluted. And no, you cannot catch warts from touching a toad.

Toads are voracious pest predators in the warm months, but go into underground hibernation around Halloween and won’t emerge until spring.

The howl of the wolf can cause heart-rending terror and spiritual inspiration in others. People have either vilified or glorified wolves throughout history, but the real life wild canines are neither hounds from hell or spiritual guides. In reality, gray wolves are top predators - they control deer and other prey populations as well as other predators lower down on the food chain, like coyotes and raccoons.  Unless you're a farmer or a rancher and especially if you're an office worker at a conservation society, you probably are okay with wolves.  Ranchers in states where wolves are protected and cause damage to their livestock lament they will go to prison for less time if they kill the politicians who passed laws declaring wolves endangered than if they kill the wolves instead.

The gray wolf populations lives in limited regions of the United States and Canada in wilderness areas. They go out of their way to avoid humans.  By Halloween, they are in the process of growing their thick winter coats to guard against winter’s bitter temperatures.

The slithering, legless body. The forked tongue. The lidless eyes. Everything about a snake is decidedly non-human. But even though they strike fear in many people, most snake species are completely harmless. In fact, snakes are enormously beneficial, helping to control insect and rodent pests. The only time a snake will try to bite is if it’s cornered or startled. The natural reaction of all snakes to people is to get away or hide.

By Halloween, most snakes are moving to their underground hibernation grounds, where they will doze away the cold months waiting for the warmer days of spring.

The nocturnal habits, glowing eyes and utterly silent flight make these predatory birds the epitome of eeriness. It turns out that all of those things are simply adaptations for survival. Owls are nocturnal to avoid competition for prey with day-flying hawks. Their giant eyes and the fringed feathers that make no noise when the bird is flying allow them to hunt in the darkness.

Most owls are year-round residents and don’t migrate. Listen for the hoot-hoot-hoot of the great horned owl or the whinnying shriek of the screech owl when you’re trick or treating this year!

Now that you know the truth about Halloween wildlife, get outside and look for these cool animals.You might consider attracting them to your yard (except the wolves) The National Wildlife Federation shows you how to turn your property into a wildlife habitat at http://www.nwf.org/gardenforwildlife