Astronomers have discovered white dwarf stars with pure carbon atmospheres. The discovery could offer a unique view into the hearts of dying stars.

These stars possibly evolved in a sequence astronomers didn't know before. They may have evolved from stars that are not quite massive enough to explode as supernovae but are just on the borderline. All but the most massive two or three percent of stars eventually die as white dwarfs rather than explode as supernovae.

When a star burns helium, it leaves "ashes" of carbon and oxygen. When its nuclear fuel is exhausted, the star then dies as a white dwarf, which is an extremely dense object that packs the mass of our sun into an object about the size of Earth. Astronomers believe that most white dwarf stars have a core made of carbon and oxygen which is hidden from view by a surrounding atmosphere of hydrogen or helium. 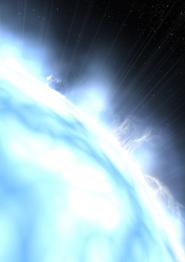 Artists' concept of the surface of the white dwarf star H1504+65, believed to have somehow expelled all its hydrogen and all but a very small trace of its helium, leaving an essentially bare stellar nucleus with a surface of 50 percent oxygen and 50 percent carbon. When this star cools, it may have a carbon atmosphere, like the stars newly found by University of Arizona, Canadian and French astronomers.(Illustration credit: M.S. Sliwinski and L. I. Slivinska of Lunarismaar) (Copyright photo by Sliwinski, M.S. and Sliwinska, L.I.)

"We've found stars with no detectable traces of helium and hydrogen in their atmospheres," said University of Arizona Steward Observatory astronomer Patrick Dufour. "We might actually be observing directly a bare stellar core. We possibly have a window on what used to be the star's nuclear furnace and are seeing the ashes of the nuclear reaction that once took place."

Dufour, UA astronomy Professor James Liebert and their colleagues at the Université de Montréal and Paris Observatory published the results in the Nov. 22 issue of Nature.

Liebert identified a few dozens of the newfound white dwarfs as "DQ" white dwarfs in 2003. When observed in optical light, DQ stars appear to be mostly helium and carbon. Astronomers believe that convection in the helium zone dredges up carbon from the star's carbon-oxygen core.

Dufour developed a model to analyze the atmospheres of DQ stars as part of his doctoral research at the Université de Montréal. His model simulated cool DQ stars, stars at temperatures between 5,000 degrees and 12,000 degrees Kelvin. For reference, our sun's surface temperature is around 5,780 degrees Kelvin.

When Dufour joined Steward Observatory in January, he updated his code to analyze hotter stars, stars as hot as 24,000 degrees Kelvin.

"When I first started modeling the atmospheres of these hotter DQ stars, my first thought was that these are helium-rich stars with traces of carbon, just like the cooler ones," Dufour said. "But as I started analyzing the stars with the higher temperature model, I realized that even if I increased the carbon abundance, the model still didn't agree with the SDSS data," Dufour said.

Dufour and his colleagues have identified eight carbon-dominated atmosphere white dwarf stars among about 200 DQ stars they've checked in the Sloan data so far.

The great mystery is why these carbon-atmosphere stars are found only between about 18,000 degrees and 23,000 degrees Kelvin. "These stars are too hot to be explained by the standard convective dredge-up scenario, so there must be another explanation," Dufour said.

Dufour and Liebert say they these stars might have evolved from a star like the unique, much hotter star called H1504+65 that Pennsylvania State University astronomer John A. Nousek, Liebert and others reported in 1986. If so, carbon-atmosphere stars represent a previously unknown sequence of stellar evolution.

Astronomers currently believe this star somehow violently expelled all its hydrogen and all but a very small trace of its helium, leaving an essentially bare stellar nucleus with a surface of 50 percent carbon and 50 percent oxygen.

"We think that when a star like H1504+65 cools, it eventually becomes like the pure-carbon stars," Dufour said. As the massive star cools, gravity separates carbon, oxygen and trace helium. Above 25,000 degrees Kelvin, the trace helium rises to the top, forming a thin layer above the much more massive carbon envelope, effectively disguising the star as a helium-atmosphere white dwarf, Dufour and Liebert said.

But between 18,000 and 23,000 degrees Kelvin, convection in the carbon zone probably dilutes the thin helium layer. At these temperatures, oxygen, which is heavier than carbon, has probably sunk too deep to be dredged to the surface.

Dufour and his colleagues say that models of stars nine to 11 solar masses might explain their peculiar carbon stars.

Astronomers predicted in 1999 that stars nine or 10 times as massive as our sun would become white dwarfs with oxygen-magnesium-neon cores and mostly carbon-oxygen atmospheres. More massive stars explode as supernovae.

But scientists aren't sure where the dividing line is, whether stars eight, nine, 10 or 11 times as massive as our sun are required to create supernovae.

"We don't know if these carbon atmosphere stars are the result of nine-or-10 solar mass star evolution, which is a key question," Liebert said.

The UA astronomers plan making new observations of the carbon atmosphere stars at the 6.5-meter MMT Observatory on Mount Hopkins, Ariz., in December to better pinpoint their masses. The observations could help define the mass limit for stars dying as white dwarfs or dying as supernovae, Dufour said.