Cellular damage due to stress is an important factor in aging processes. It is therefore strange that starving, which is stressful, decelerates aging processes and extends the lifespan of organisms.

Proteins from the sirtuin family contribute to this mechanism but the exact function of the seven members of the sirtuin family in mammals has not yet been clarified. Results obtained in studies performed by protein research scientists in Bochum and Dortmund under the auspices of Assistant Professor Dr. Clemens Steegborn (Institute for Physiological Chemistry at RUB) have supplied first insights into this phenomenon.

The scientists identified initial functions of the two human sirtuins Sirt3 and Sirt5 that reside in mitochondria, the energy supplying “cellular power stations.” 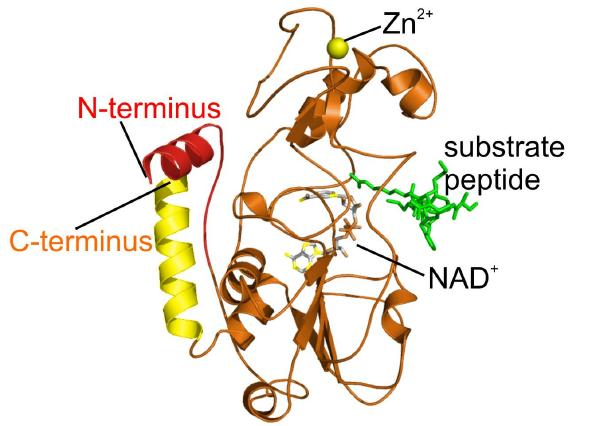 The mitochondria within the cell are responsible for the provision of energy by utilizing food molecules. This fact suggests that sirtuins located at this site should be involved in the life-prolonging effect of nutritional deficiency. The scientists did, however, discover that Sirt5 is not only located within the mitochondria, but also within the so-called intermembrane space between the exterior and interior membrane of the mitochondria.

At this site, Sirt5 can modify the protein cytochrome c, which plays a major role in both, energy generation and the cellular self-destruction program, i.e. apoptosis, the reaction to extreme cellular stress. Dr. Steegborn states “that malfunctioning of apoptosis could be an explanation for the presumed role of Sirt 5 in some forms of cancer, but that the precise function of Sirt5 and the modification of cytochrome c have not yet been finally clarified.”

The scientists were, however, able to identify a precisely defined function for Sirt3. They were able to show that two central metabolic enzymes are altered and thereby activated. This activation enables the cells, if subject to a lack of food, to make use of other sources of energy and to use these effectively. More specifically, Sirt3 activates special forms of these enzymes that simultaneously form NADPH, which is required for the regeneration of cellular anti-stress systems. This explains how increased Sirt3 activity during starvation can contribute to a prolonged lifespan.

Diverse research groups have been able to show that increased sirtuin activity can increase the lifespan of model organisms. The situation is, however, more complex in human beings because different sirtuins are located at diverse sites in the cell and all have specific functions.

The current research work, performed by the scientists in Bochum and Dortmund, are a first step towards the comprehension of these processes. Exact understanding of the specific functions is however a prerequisite to enable utilization of the correct sirtuin as target molecule for the desired therapeutic effect.

Dr. Steegborn assumes that this will probably not lead to a life-prolonging elixir. The scientists do, however, hope to be able to identify agents that enable the treatment of age-related diseases. This in turn would enable “healthy aging.”