News Staff
For the second time this year, The University of Western Ontario Meteor Group has captured incredibly rare video footage of a meteor falling to Earth. The team of astronomers suspects the fireball dropped meteorites in a region north of Guelph, Ontario, Canada, that may total as much as a few hundred grams in mass.

The Physics and Astronomy Department at Western has a network of all-sky cameras in southern Ontario that scan the sky monitoring for meteors.

On Wednesday, October 15 at 5:28 a.m., all seven cameras of Western's Southern Ontario Meteor Network recorded a bright, slow fireball in the predawn sky. 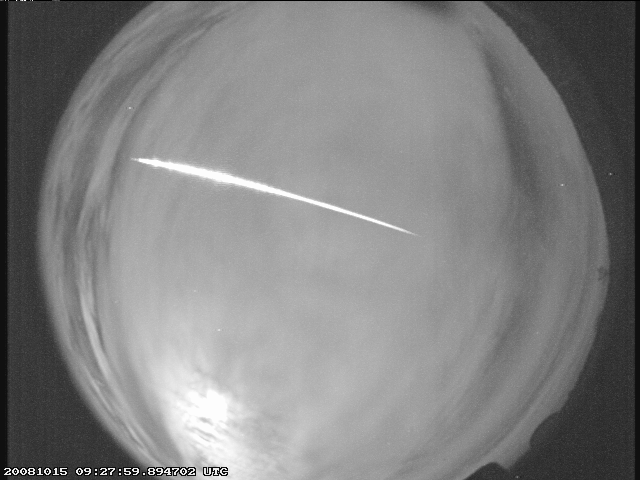 Associate Professor Peter Brown and Phil McCausland, a postdoctoral researcher in Planetary Science, are hoping to enlist the help of local residents in recovering one or more possible meteorites that may have crashed.

"This event was a relatively slow fireball that made it far into the Earth's atmosphere. Most meteoroids burn up by the time they hit an altitude of 60 or 70 kilometres from the ground," explains McCausland, who is heading to the region next week to investigate. "This one was tracked by our all-sky camera network to have penetrated to an altitude of about 37 kilometres and it slowed down considerably, so there is a possibility that at least one and possibly several small meteorites made it to the ground."

By knowing the trajectory from the camera observations, the researchers can also track backwards to get the orbit of the object before it hit the Earth.

"The meteorite was on a typical Earth-crossing asteroid-type orbit, so we also expect that it is a stony-type meteorite," says McCausland.

In March, the network of all-sky cameras captured video of a meteor falling to Earth that may have crashed in the Parry Sound area.