News Staff
The math used to analyze cyclic phenomena like the ebb and flow of ocean tides has been applied to Sol, the star we orbit. While it can't do anything to flatten its irregularities, or the impacts it has on communications, temperature, and weather, the "Sun clock" created by scholars shows it starts and stops on a much more precise schedule than can be discerned by observations plotted linearly over time.

Solar cycles, the rhythmic waxing and waning of activity on the Sun, occur about every 11 years on average, but average means many periods are years shorter and longer. They also vary in their strength but one thing they all share is a kind of bell curve of starting quietly, reaching the cycle’s solar maximum before quieting again.

During and after solar maximum, the Sun is more likely to produce space weather that can impact Earth, damaging satellites, scrambling radio communications, and disrupting power grids, among other impacts. Yet the magnitude of that maximum can change significantly from cycle to cycle and the new sun clock could be used as a planning tool to help keep space- and ground-based infrastructure safe. 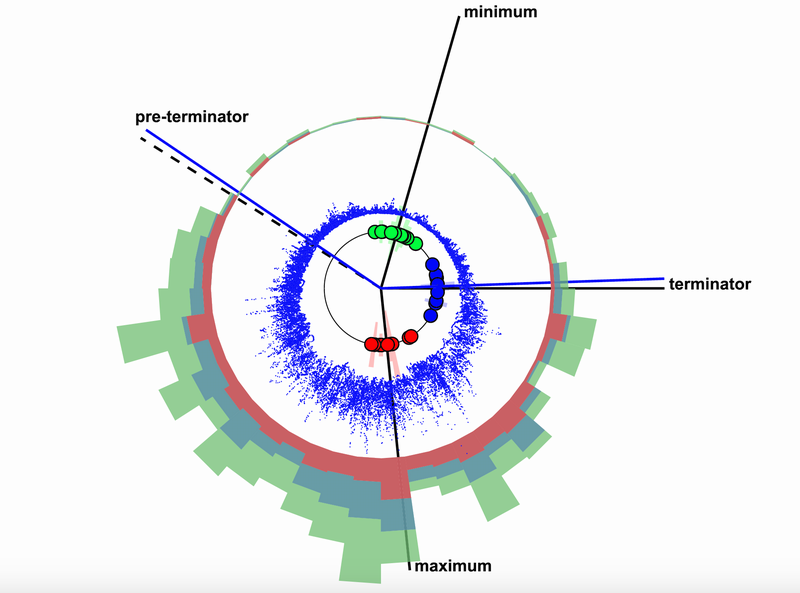 The clock was created using the Hilbert transform, which like the Fourier transform has become a common technique in many fields of science, to convert the linear observations of past solar cycles onto a circle, stretching and shrinking the cycles as necessary to a standard 11 years. As the cycles were overlaid on top of each other on the clock’s face, distinct “times” on the clock face when solar activity is flipped on and off came into focus.

"Our Sun clock method showed clear switch on and switch off times demarcating quiet and active intervals for space weather for the first time," said Sandra Chapman, a professor at the University of Warwick who led the study

The creation of the solar clock is part of a larger body of research that makes a case that the Sun’s cycles are far more predictable and regular than scientists realize. They have identified “terminator” events on the Sun, which they say offer observational evidence of the start and stop of solar cycles, something that has been estimated in the past.

“The Sun is not nearly as irregular as we thought,” said co-author and National Center for Atmospheric Research deputy director Scott McIntosh. “But we’ve been looking in the wrong places. Once you realize that the Sun is actually adhering to a larger cycle, and that the appearance and disappearance of sunspots are just a symptom of that cycle, not the cycle itself, you see a beautiful order in the chaos. The striking regularity we find in this new sun clock is evidence of that.”
News Articles
More Articles All Articles
About