News Staff
If you read English newspaper The Guardian, you will be convinced farming is killing us all. Instead of being the negative they persistently insist, food is a basic resource, we will literally die without it, and the modern world is creating more food at affordable cost with less environmental strain and less energy than once even dreamed possible. Actual data show all land use combined, types of farming, forestry, etc. are only 23 percent of greenhouse gas emissions and not all greenhouse gases are equal. As the west switches more to cleaner natural gas for energy, which is methane, including for powering farm equipment, the real impact is negligible because methane dissipates in a fraction of the time that CO2 does.

The International Panel on Climate Change issued the first-ever comprehensive report on land and climate interactions earlier this month and stated that land use absorbs nearly 33 percent of carbon dioxide emissions. Sometimes a tree becomes a table but a new tree is always planted, and it's during growth that carbon is used.

How long will the Amazon rainforest continue to act as an effective carbon sink? It's a difficult question. Models of the past were not very good because they relied too much on estimates. An international team of scientists in the AmazonFACE project of Brazil has investigated this question and found that accounting for phosphorus-deficient soils reduced projected carbon dioxide uptake by an average of 50% in the Amazon, compared to current estimates based on previous climate models that did not take into account phosphorus deficiency. 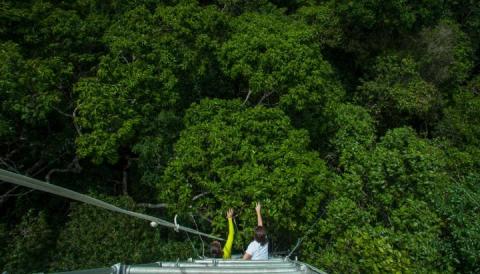 The Amazon Basin is critical to help mitigate climate change due to its trees absorbing around a quarter of the CO2 released each year from the burning of fossil fuels.

"Most predictions of the Amazon rainforest's ability to resist climate change are based on models that have outdated assumptions; one of those is that a sufficient supply of nutrients such as phosphorus exist in soils to enable trees to take in additional CO2 as global emissions increase," said Berkeley Lab research scientist and study co-author Dr. Jennifer Holm. "But in reality the ecosystem is millions of years old, highly weathered, and therefore depleted of phosphorus in many parts of the Amazon."

The AmazonFACE project monitored tree growth and leaf development aboveground, and tracked root growth and activity within soils below ground at a study site north of Manaus, Brazil where ambient CO2 concentration is planned to be artificially elevated to enable a realistic investigation of how future CO2 concentrations will affect the ecosystem.

"Our improved models now take into account these complexities, and could serve to help paint a more realistic portrayal of how the Amazon, and the tropics in general, will be impacted by climate change and the ability of trees to remove greenhouse gases from the atmosphere," Holm said.
News Articles
More Articles All Articles
About