Carbon Life: Triple-Alpha Reaction Inside Stars May Be Much Faster Than Thought
By News Staff | December 4th 2020 08:27 AM | Print | E-mail

News Staff
Nearly all of the atoms that make up the our planet and us were forged in stars and the carbon most important to life as we know it was made by the triple-alpha process. The process starts with alpha particles, cores of helium atoms, with each alpha particle is made up of two protons and two neutrons. The triple alpha process is just what it sounds like; three alpha particles are fused inside a star, creating a new particle with six protons and six neutrons - the most common form of carbon in the universe - with a surplus of energy, a Hoyle state. That Hoyle state can split back into three alpha particles or relax to the ground state of stable carbon by releasing gamma rays.

A new computer model believes it may be much faster than previously assumed, as much as 10 times faster. It would also force a rethink for the planet’s unusually high amounts of some isotopes of the elements ruthenium and molybdenum.

The innermost regions of supernovae have helpers floating around: excess protons. Thus, a supernova rich in protons can speed up the triple-alpha reaction, but there is a catch.  Accelerating the triple-alpha reaction also puts the brakes on the supernova’s ability to make heavier elements on the periodic table. This is important because scientists have long believed that proton-rich supernovae created Earth’s surprising abundance of certain ruthenium and molybdenum isotopes, which contain closer to 100 protons and neutrons. 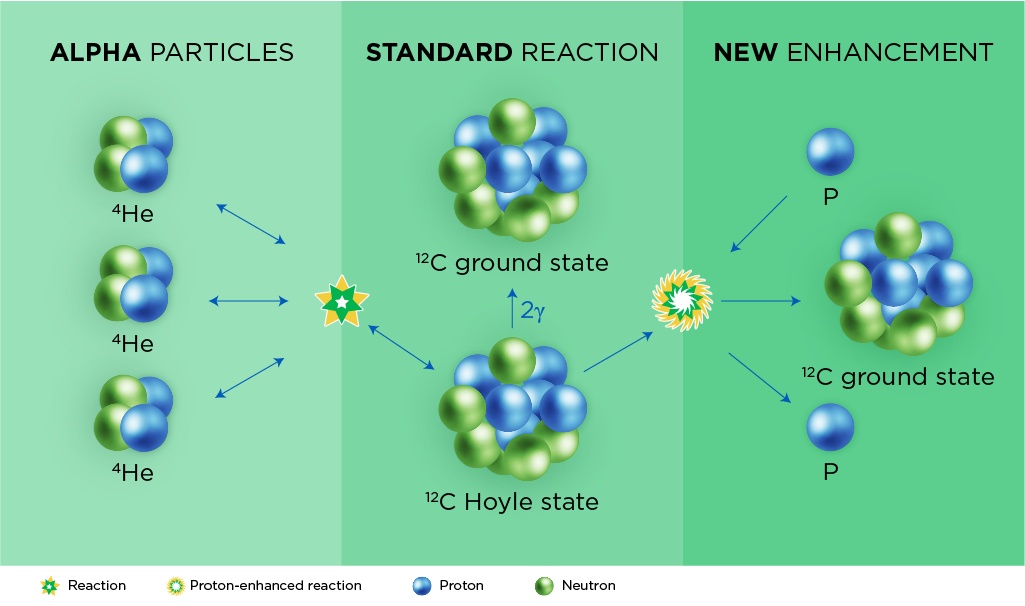 In the triple-alpha process, stars fuse three helium nuclei, alpha particles together to create a single carbon atom with a surplus of energy - a Hoyle state. That Hoyle state can split back into three alpha particles or relax to the ground state of stable carbon by releasing a couple gamma rays (center). Inside supernovae, however, the creation of stable carbon can be enhanced with the help of extra protons (right). Credit: Facility for Rare Isotope Beams

That means ruthenium and molybdenum isotopes aren't being made in proton-rich supernovae, so where? There is speculation but nothing that has created a consensus.
News Articles
More Articles All Articles
About