Tommaso Dorigo
The neutron, discovered in 1932 by Chadwick, is a fascinating particle whose existence allows for the stability of heavy nuclei and a wealth of atoms of different properties. Without neutrons, Hydrogen would be the only stable element: protons cannot be brought together and bound in a stable system, so e.g. Helium-2 (an atom made of two protons with two electrons) is very short-lived, as are atoms with more protons and no neutrons. So our Universe would be a very dull place.

Neutrons provide stability to nuclei containing two or more protons because they attract protons by the strong interaction, while not repelling them by electromagnetic forces. One may then form stable configurations with many protons packed together with neutrons - the neutrons keep protons from flying away by the electrostatic repulsion of other protons.

Ever since its discovery, the theoretical and experimental study of the neutron has provided us with a wealth of information about matter and interactions. In particular, studies focused on the decay of the neutron into a proton, an electron, and an electron antineutrino: this so-called "beta decay", which for a free neutron takes place with a half-life of 15 minutes, is at the origin of radioactivity of many materials, and it is the prototype of all charged-current weak interactions.

The trouble with the strong force

Yet even more interesting, and to this date less well-understood, are the strong interaction properties of systems made of several neutrons. That is because protons and neutrons are made of quarks and gluons, and quantum chromodynamics (QCD), the theory that describes the interaction between those elementary constituents, is not "elementary" at all! While in principle we know what forces quarks and gluons are subjected to when they interact, it is not straightforward to use our theory to calculate them, and predictions are thus complicated and imprecise.

To explain the difficulties in using QCD to calculate the dynamics of quarks and gluon systems, consider a quark and an antiquark close together. We may calculate the strength of the force that attracts or repels them by imagining that this is caused by the exchange of one gluon, in analogy with what happens with an electron and a positron due to quantum electrodynamics (QED), when the attractive force is due to the exchange of a photon. 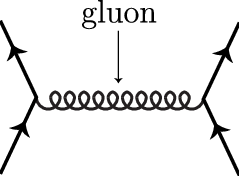 [Above: two quarks, symbolized by straight lines moving from the bottom to the top of the diagram, interact by exchanging a gluon, shown by the curly line in between.]

But the pair can also interact by exchanging two gluons, or three, or four... What we do then is to use a "perturbative series expansion", whereby we consider in turn more and more complex contributions to the interaction we wish to calculate. In the end what we do is adding up all these contributions to the total force, as we do in QED for the electron-positron pair, which can also exchange multiple photons. Because calling in more interaction carriers (gluons for QCD, photons for QED) entails a reduction of the probability of the corresponding process, when we sum all the contributions for multiple photons we get a converging series, and we come up with a meaningful result.

E.g., say that the exchange of a photon causes a force equal to 1/2, and the exchange of every additional photon contributes a factor 1/(2^N), where N is the number of photons. This means we have to sum 1/2 + 1/4 + 1/8 + 1/16 + ..., and we know where this goes: the series converges, and the total force is 1. So we get a finite result. For a one-gluon exchange, this may mean a force of 1, and every additional gluon contributes the addition of 1. The series now looks like 1+1+1+1+1..., which diverges - we cannot compute the result. Things are in reality much more complicated, but I hope you get the gist of this dumbed-down discussion.

The above difficulties are the reason why we cannot, to this day, give a definite answer about whether a system made of multiple neutrons is stable or not. We have many ways to guess what happens, though, as we can observe the behaviour of nuclei made of protons and neutrons, so we know a lot about the general properties of multi-nucleon systems. This is because neutrons and protons are essentially the same particle for QCD, as that interaction does not care about the electric charge of the proton.

In nature, the neutron is unstable if left alone, but it makes a perfectly stable system when bound to a proton. Does a two-neutron system exhibit the same properties? This is a very interesting question, to which recent studies give a negative answer: a system made up of two neutrons is not bound - it dissociates too quickly to allow us to talk of a stable state of matter. The difference between the pn and the nn system is more complex than one might think, and involves isospin considerations, the Pauli exclusion principle, and other details, and I am in no position to deepen the matter here.

Similarly, systems of three or five or more neutrons are expected to not form bound systems. But the four-neutron system might stand a chance to create a bound system, if even for a very short time. In fact, if such a system were observed experimentally, it would create a small revolution in nuclear physics. As Wikipedia points out, according to nuclear physicist S.C. Pieper,

"[it] does not seem possible to change modern nuclear Hamiltonians to bind a tetraneutron without destroying many other successful predictions of those Hamiltonians. This means that, should a recent experimental claim of a bound tetraneutron be confirmed, our understanding of nuclear forces will have to be significantly changed."

A four-neutron bound state can be sought for by creating low-energy collisions between isotopes that contain an excess of neutrons. This is what was recently reported in an experimental study performed using Lithium-7 nuclei accelerated by a Tandem accelerator in Garching. Authors collided nuclei accelerated to a kinetic energy of 46 MeV with a target made of Lithium dioxide containing the same isotope of Lithium. As projectiles and targets both contain 3 protons and four neutrons, the reaction may give rise to nuclei of Carbon-10 (which contain 6 protons and four neutrons), leaving behind four excess neutrons.

The experiment is quite complicated and I will not attempt a summary here, but I will show its "money plot" below - it is a distribution of the energy of Carbon-10 ions ejected from the collision. One expects a smooth distribution if the four neutrons are recoiling incoherently, while the formation of a bound state of four neutrons might correspond to the leftmost of the two peaks shown in the figure. 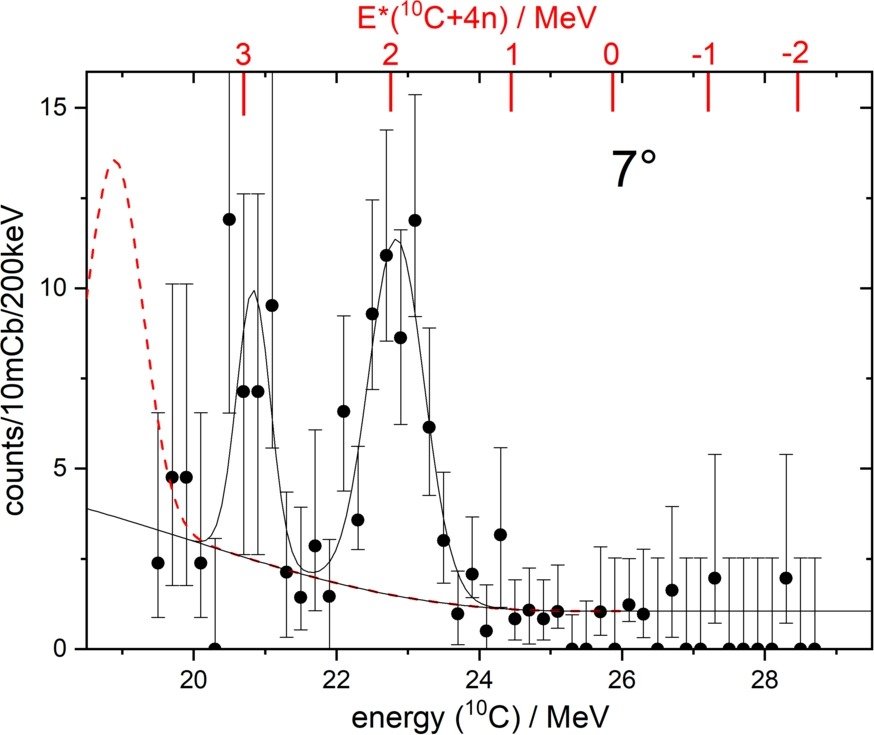 Of course, the accumulation of observed collision events in the 21-MeV region is too weak to allow for definite claims on the creation of bound four-neutron states. It is interesting, though, to see what the authors make of the observed structure: quoting from the article,
The height of the peak is 2.5 times its uncertainty. But there is a better way to estimate the significance of the 20.8 MeV peak. [...] We make use of the Poisson distribution of the four bins 20.5 to 21.1 MeV which have a total of 15 events. The sum of the four values at the postulated 20.8 MeV peak amounts to 5.51. The probability to observe 15 or more events from a Poisson distribution with expectation value 5.51 is 6.1 x 10^-4, while it is 0.295 for an expectation of 12.70. [...] The significance of the 20.8 MeV peak [amounts] to roughly 3 sigma."
To me this is a little disingenuous, as the authors are picking up four bins in a distribution to extract a p-value from a counting experiment (I wrote floods of electronic ink in this blog to explain why this a-posteriori way of assessing anomalies is problematic, to use an euphemism). By the way, 6.1*10^-4 would correspond to 3.23 standard deviations, so they are also being a bit cavalier with their significance claim - which I read to mean that they do not give their assumptions too much value.

So, do four-neutron resonances really exist? I take the results of this group to mean that the question - a very important one for nuclear physics, as I mentioned above - is still on the table. But it might not be so for long, as there are surprises boiling under a certain magazine's (not a bitch) embargo cover...